“But controllers, monitors, European facilitators, I think the Russians would accept that,” he said.

At present Russia has an agreed peacekeeping role in the breakaway Georgian region of South Ossetia, where the conflict broke out.

David Miliband, the British foreign minister, said “the EU should stand ready” to get involved.

Alexander Stubb, the Finnish foreign minister, was also keen about the idea.

“I’m convinced at the end of the day we will find an international peacekeeping [force]” in the region, with the EU at its heart, he said.

But now is not the time for “a very tough discussion” on EU-Russia relations, said Stubb, who is also president of the Organisation for Security and Co-operation in Europe (OSCE).

Stubb hailed the role of the EU’s French presidency in brokering a deal to end the hostilities.

Nicolas Sarkozy, the French president, has also spoken of the possibility of such a peacekeeping force.

“We have a ceasefire, we do not yet have peace,” he said. “What is probably going to happen is a few skirmishes and a few bombs here and there.”

But Petras Vaitiekunas, his Lithuanian counterpart, said that Russia must suffer “some consequences” for its aggression in Georgia, while backing the call for EU monitors as part of an international peacekeeping force.

He said EU peacekeepers “must be” introduced into the Georgian breakaway region of South Ossetia, where the fighting broke out.

The EU needs to “persuade our Russian colleagues and partners to change formulas of peacekeeping,” he added, referring to the current peacekeeping set-up which involves Russians, Georgians and Ossetians.

Radoslaw Sikorski, the foreign minister of Poland, another of former Soviet satellite states keen to persuade the EU to take a tough stance against Russia, said he thought an international peacekeeping force would be “more credible” than a European version.

“If such a force were put together, Poland would contribute,” he said.

However, Carl Bildt, his counterpart in Sweden, noted that “at the moment there are no signs of the Russians letting anyone in.

“The Russians are party to this conflict, they are not a peacekeeping force,” he told reporters as he arrived for the talks.

“According to them, they are the ones guaranteeing their peace. It should be peace that is acceptable for everyone. I think it would have to be more balanced.”

The foreign ministers from the 27 EU member states, hastily summoned to the emergency meeting on the Georgian conflict, were seeking to forge a common line on the issue.

That task is complicated by wishes from some members, including France and Germany, not to ruin ties with a resurgent, energy-rich Russia, while some central and eastern European members, including Lithuania, are more keen to demonstrate their displeasure at Moscow’s actions.

Meanwhile, the United States has requested a meeting of Nato foreign ministers over the situation in Georgia, which could take place possibly early next week, an alliance spokeswoman said on Wednesday.

“The US has formally requested a meeting of Nato foreign ministers and we are consulting with allies on the possiblity of having such a meeting early next week,” Carmen Romero said.

Russia would not take part in the meeting, she said. 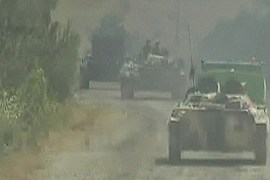 Large convoy of military vehicles travels towards the capital from Gori. 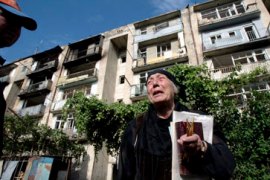 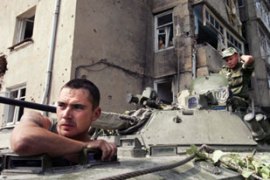 Russia and Georgia agree to truce

Pockets of fighting still reported but both sides sign up to EU-backed peace plan. 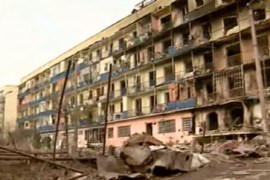 The official end to the fighting came too late for at least five people in the Georgian town of Gori.