Posters denounced Putin, the former Russian president, with one depicting him with the caption “Wanted: Crimes against humanity in the world.”

“The targets of the Russian armed forces are humanity and liberty!” Saakashvili told the crowd.

Saakashvili has appealed for international support after Russian forces moved into Georgia on Friday after the Georgian army launched an offensive to bring South Ossetia, which broke away in the early 1990s, back under government control.

However, Georgia says that Russia is still continuing operations inside Georgia.

In Brussels, Nato ambassadors voiced serious concern at the situation in Georgia, with many nations saying it could not be “business as usual” with Russia.

The ambassadors from the 26 Nato nations met in the Belgian capital on Tuesday ahead of talks with the head of Georgia’s Nato mission.

Kurt Volker, the United States ambassador to Nato, said there was “serious concern about the events in Georgia” including the humanitarian situation, support for a ceasefire and the withdrawal of forces.

An extraordinary meeting requested by Moscow of the joint Russia-Nato council did not take place.

Volker said: “Given the events in Georgia, many allies expressed the  sentiments that there cannot be business as usual with Russia.”

At their Bucharest summit in April, Nato member states agreed that neither Georgia nor Ukraine were ready for Nato candidate status, a preliminary to joining the alliance, but that they could become members of the alliance one day. 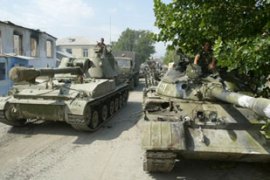 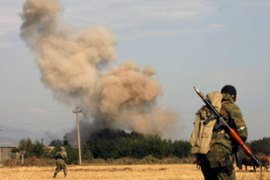 Russia ‘cuts Georgia in half’

Tbilisi says Russian troops take the town of Gori, 60km from the capital, as others enter from Abkhazia.