His body was driven through Srinagar, accompanied by an estimated 50,000 residents, many of whom chanted “down with security forces, we want freedom” and “we will spill blood for blood”.

Mourners and protesters broke through a police cordon and freed two separatist leaders who were under house arrest so they could lead the funeral prayers.

In Bandipora, about 60km north of Srinagar, about 20,000 Muslims defied a curfew  to protest against Monday’s killings.

India reacted angrily to the statement.

Such statements by leaders of a foreign country do not help the situation. Nor do they contribute to creating the atmosphere necessary for the dialogue process between India and Pakistan to move forward,” India’s foreign ministry spokesman said.

Analysts have warned the violence in Kashmir has endangered the fragile 2004 peace process between India and Pakistan.

The land dispute has polarised Indian Kashmir, which is split between the Muslim-majority Kashmir valley and the Hindu-dominated region around Jammu city, severely curbing trade between the two areas.

As a result, traders in Kashmir are trying to sell their goods in neighbouring Pakistan.

But Indian authorities denied there was an economic blockade and said lorries, guarded by policemen and soldiers, were plying the region’s main 300km road, the only surface link between Kashmir valley and the rest of India.

The recent protests began after the Kashmiri government promised to give forest land to the trust that runs Amarnath, a cave shrine visited by Hindu pilgrims.

But the government then backed down from its decision, which in turn angered many Hindus in Jammu. 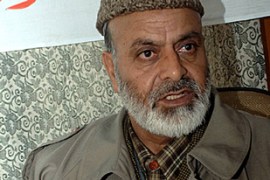