Earlier, a senior member of Mugabe’s Zanu-PF party told the Reuters news agency that there had been an agreement to make Tsvangirai, leader of the Movement for Democratic Change (MDC), the prime minister, as part of a power-sharing deal.

The political crisis was sparked by Mugabe’s controversial re-election in a presidential run-off boycotted by Tsvangirai.

The Zanu-PF official, who spoke on condition of anonymity, said a deal could be struck on Sunday under which a unity government would form for five years.

“We anticipate there could be a signing tomorrow, after the leaders have met to thrash out the remaining issues,” the official told Reuters.

Although it has been agreed that Tsvangirai will take the premiership, the official said, his powers remain under discussion.

Georgina Godwin, a Zimbabwean journalist, told Al Jazeera that such a deal would put Tsvangirai in “a powerful position”.

“If Tsvangirai is indeed prime minister then Mugabe’s position would be largely ceremonial,” she said “It’s a way of easing him out without him losing face and Tsvangirai will in fact hold the reigns.”

“I dispute whether any members of Zanu-PF should be in any kind of transitional government. Not a single one of them have walked away from this without blood on their hands,” Godwin said.

Mugabe, as well as the country’s highly influential security chiefs and government ministers, greeted Mbeki at the airport as the South African leader began his visit.

Government sources said the two presidents would meet on Sunday.

It is still not clear if Mbeki will meet with Mugabe and Tsvangirai individually or hold three-way discussions.

Godwin said that Mbeki was “under tremendous pressure particularly because next week the regional heads of government are all meeting and he has to come up with some kind of  answer”.

“Perhaps he has achieved much more than any of us thought that he could,” she said.

Analysts say any agreement would require a green light from the security and military chiefs, powerful figures with sway over Mugabe, who will want to make sure they are not vulnerable to international prosecution when the dust settles.

Should an agreement be reached, it could take at least two weeks to convene parliament and push through expected constitutional changes to create new government posts and implement other aspects of the deal.

Power-sharing talks began after the political rivals signed a deal on July 21 laying the framework for negotiations.

In a sign the two sides were moving closer to an agreement, the parties issued a joint statement earlier this week calling on their supporters to halt political violence.

However, on Thursday Mugabe said that, although the talks were going well, media reports about a draft agreement under which Tsvangirai would run the country while he would become ceremonial president were “utter nonsense”.

Zanu-PF has insisted the 84-year-old Mugabe must be recognised as president as part of any deal, since he claimed victory the June 27 vote. 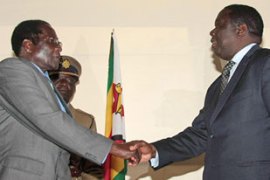 Mbeki heads to Zimbabwe for talks

South African leader to meet rivals Mugabe and Tsvangirai in a bid to end stalemate.