Tens of thousands were stranded by the floods, which began on Friday, the official said.

“It is a very ugly scene up here with numerous villages completely isolated after local roads were washed away by the floods and landslides,” a spokesman for Lao Cai’s Storm and Flood Prevention Centre said.

According to the spokesman, the army had been leading rescue work but 32 people were still missing.

“Although the rain and floods have subsided, the threat of new landslides is still very serious,” he added.

In the neighbouring Yen Bai province, floods and landslides killed 25 people, and torrential rain carried some people kilometres from their homes, a disaster official said.

The water and walls of mud hit during the night while people were sleeping, and could not run to safety, he said.

Twelve more people were found dead in the provinces of Quang Ninh and Phu Tho, as flood waters knocked down trees and electricity pylons and washed away houses, officials said.

A total of 66 people were missing in several northern provinces including Lao Cai, Quang Ninh, Yen Bai and Phu Tho, the Vietnamese government said.

At least five people were missing in Lao Cai’s resort town of Sapa, popular with foreign tourists, but it was not known if foreigners were among the victims, the national meteorology centre said.

Vietnam is prone to floods and tropical storms that kill hundreds of people each year.

A typhoon has ripped off roofs, felled trees and cut power lines on Vietnam’s central coast, killing at least seven people before weakening overland and moving into neighbouring Laos. 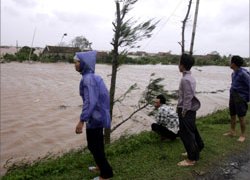 China’s southeastern province of Hainan is cleaning up after Typhoon Damrey tore through the island, killing at least 16 people and causing extensive damage.

At least 49 people have been killed and eight others are still missing after severe floods hit central Vietnam, cutting off several villages and burying sleeping people alive.