Russia’s armed forces on Sunday denied plans to expand their conflict with Georgia into the Abkhazia region.

“We do not plan to escalate the conflict in this region,” Anatoly Nogovitsyn, an army spokesman, said in televised remarks, referring to Abkhazia.

But Georgian officials have accused Russia of escalating the conflict by involving Abkhazia, saying Russia has sent troops and artillery into the region and had begun an operation to storm the Georgian-controlled Kodori gorge in Abkhazia.

“They [the Russian army] have started the operation to storm Kodori gorge,” said Shota Utiashvili, an interior ministry spokesman.

Georgia has police stationed in the gorge, protecting a parallel pro-Tbilisi Abkhazian government.

The UN, which has international monitors in the area, has warned of a possible second front opening in the Georgia-Russia conflict.

Separatist authorities in Abkhazia said that they had sent 1,000 troops to the gorge, which Georgian forces control as a strategic foothold in the breakaway Black Sea territory.

Earlier on Sunday, Georgian forces said they had withdrawn from Tskhinvali, the South Ossetian capital, to positions outside of the city.

Nogovitsyn said Russian peacekeeping forces were now in control of most of the capital.

A joint delegation of the US, EU and the Organisation of Security and Co-operation in Europe (OSCE) has arrived in Georgia in order to mediate a ceasefire.

On Saturday, a third emergency session of the UN Security Council ended without an agreement on the wording of a statement calling for a truce.

A fourth emergency session was due to take place in New York at 1500 GMT. 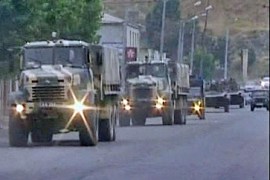 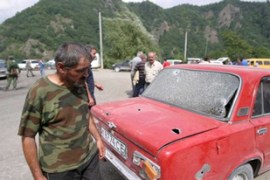 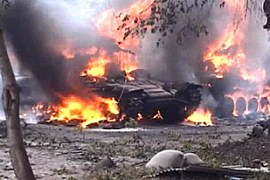