Dalila was a leader of The Damascus Spring, a movement including intellectuals and opposition figures, which campaigned for democracy when Bashar al-Assad, Syria’s current president, succeeded his late father, Hafez al-Assad, in 2000.

Security forces suppressed the movement several months later and jailed its leaders.
The 68-year-old Dalila was arrested in 2001 and sentenced to 10 years in prison for attempting to change the Syrian constitution, inciting armed rebellion and spreading false information.

Thursday’s release came after more than two dozen Syrian and Arab human rights groups urged Syria to free Dalila, who they said was in ailing health.

However, Qurabi said that Dalila was in good health.

France and the United States have been leading international calls to free Dalila and other secular political prisoners in Syria. 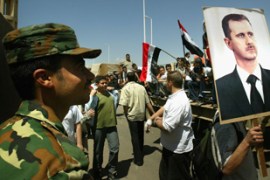