Lucas Heinrich, a physics student from Berlin who travelled to Novosibirsk with classmates, described it as “unbelievable”.

“It became cold and dark, and suddenly it was light again. I am very happy. It was worth the trip,” Heinrich said.

The NTV news channel reported that more than 10,000 foreign tourists arrived in Novosibirsk, the largest city under the eclipse’s path, to watch it.

Friday’s eclipse began in Arctic Canada, and then passed over Greenland, western Siberia, Mongolia and China.

The first Russians to witness the eclipse were on the Arctic island of Spitzbergen, north of Norway.

In Novosibirsk, the airport announced that it turned on night-time landing lights to provide illumination and handled 14 regular flights and departures during the partial and total darkness of the eclipse, which lasted more than two hours.

Cloudy weather in other parts of western Siberia prevented many from enjoying the spectacle.

Residents of Nadym, a small town not far from the Arctic Circle, were treated to rain and full cloud cover at the moment of total eclipse.

Nevertheless, the weather failed to stop many from enjoying the festive mood and throwing barbecue parties.

It was not immediately clear how many people suffered eye injuries, despite repeated warnings to wear protective glasses.

In Moscow, there was a partial eclipse, with half the sun blocked, but thick cloud cover prevented Muscovites from enjoying the view.

People have been recording solar eclipses for perhaps 4,000 years, and they typically inspire a combination of dread, fascination and awe, especially for those standing in the path of a total eclipse.

News agencies are reporting that Russia will next see a solar eclipse in 22 years. 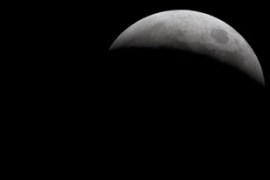 Crowds from West Africa to Central Asia gazed skywards on Wednesday to view a total solar eclipse that cast a shadow across a vast band of the planet.

Libya aims to cash in on solar eclipse

Libya is preparing to welcome thousands of Western tourists in improvised desert camps, the best place in the world to view the 29 March solar eclipse.

Skywatchers in most of Europe, the Middle East, central and northern Asia were treated on Saturday to an annular eclipse of the Sun.