Many people poured scorn on the hosting of the ‘Union for the Mediterranean’ by Nicolas Sarkozy, the French president, in Paris. Sarkozy’s brainchild was seen as little more than a talking shop that would achieve little, if anything.

But, argues Al Jazeera’s diplomatic correspondent, the summit was notable in its ability to assemble such an improbable cast of leaders and may provide a new and informal forum for resolving international problems.

Even his most ardent critics can’t fail to have been wowed.

With his domestic poll ratings languishing in the mid-thirties, Nicolas Sarkozy, France’s irrepressible president, did what many politicians tend to do as popularity crumbles at home – he launched upon a major foreign policy initiative – or detour.

Except that this one, the inaugural weekend gathering of what Sarkozy calls a “Union for the Mediterranean”, wasn’t just another jaded, perhaps cynical move of a politician in trouble.

For a start, Sarkozy and his seemingly unlikely partner, Bernard Kouchner, his Socialist foreign minister, have been planning this launch for some time.

Sarkozy chose Tangiers, Morocco in 2007 to sketch out his masterplan for restoring what many in France believe is its rightful place in the region.

But the plan also to begin to tackle some of the seemingly intractable problems of France’s near neighbours, some of whom – Morocco, Tunisia and Algeria – have less than happy memories of the “Mother country”.

Meanwhile, Kouchner, echoing Harold Macmillan, the former British prime minister’s, famous ‘Winds of Change’ speech in Cape Town at the beginning of African de-colonisation, talked of a “wind of hope” blowing around the summit.

Delegates representing 43 states from across the European Union, the Maghreb and the Middle East, congregated in the impressive surrounds of the Grand Palais in Paris, to begin to sketch out what this new Mediterranean union should be about.

Migration, pollution, water supplies and economic development were the hardcore issues most had wanted to come and discuss.

For this was a unique opportunity for those in “Fortress Europe”, to meet with their opposite numbers in the Mediterranean area – many of whom feel that Europe is not responsive enough to their economic needs and only reactive when thousands of illegal immigrants make the crossing from the poor south to the rich north in search of better lives.

But the gathering was also unique in that Bashar al-Assad, the president of Syria, and Ehud Olmert, the Israeli prime minister, were in the same place, at the same time, although the former made every effort to avoid the glances of the latter.

Franco-Syrian relations have been in cold storage since the murder of Rafiq Hariri, the former Lebanese prime minister, in 2005.

In truth, they have never really recovered from the Hezbollah-inspired suicide attack on French peacekeepers in Lebanon 25 years ago.

But increasingly, Sarkozy and his allies see Syria as the least intractable part of the Middle East conundrum.

Despite the Israeli air attacks last September on a Syrian facility that the Israelis claimed was a nuclear site, many see that there is more chance of reaching agreements over the Israeli-occupied Golan Heights, and that al-Assad is more of a pragmatist than his father.

Whether anything concrete was achieved during the myriad of discussions that took place is less important probably, at this stage, than what was achieved by Sarkozy in presenting an empty canvass to 43 different representatives who were clearly in the mood – Libya excepting – to make something out of this nascent “Union for the Mediterranean”.

The European Union is currently beset by its own growing pains, derailed by the Lisbon Treaty process and lacking the vision that seemed to be on display in Paris.

But then the “Union for the Mediterranean” does not truly exist, still less have any of its own institutions and parliament.

And away from the bonhomie, the stylish grandstanding of a French president at the height of his powers, and hopeful of a domestic revival, stood a very inconvenient truth.

Al-Assad, Olmert and Hosni Mubarak, president of Egypt and a co-chair of the summit, do actually have something in common. 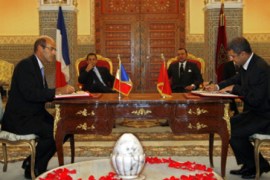 The French president outlines his plans for a new economic community. 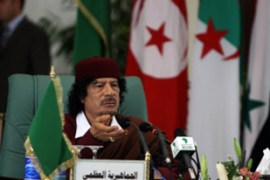