A constitutional court ruling not to impose a ban on the ruling Justice and Development party (AKP) and its leading parliamentarians in Turkey has come as a major surprise to analysts and politicians alike.

The 11-man panel of the constitutional court fell one vote short of the seven needed to impose an outright ban on the ruling party for anti-secular activity yesterday in Ankara.

Instead, the majority voted for financial sanctions on the AKP with treasury funding for the party being withheld.

The case, which was brought by Abdurrahman Yalcinkaya, the chief prosecutor, in March of this year, has led to almost five months of political and economic instability while the country prepared for the seemingly inevitable closure.

The verdict has thus been greeted with a mixture of relief and bemusement.

Yusuf Kanli, a leading commentator and columnist for the Turkish Daily News, said: “It was a surprise … Personally I was expecting the court to close down AK party.”

However, there has been a subtle shift in mood in Ankara over the last few weeks, with many in the halls of power feeling more optimistic that a ban could be avoided.

On July 15, Mark Parris, the former US ambassador to Turkey, argued that the chances for the party’s survival had improved, while Yavuz Baydar, a columnist for the conservative Today’s Zaman, conceded that: “The last few days I was inclined to believe it was a close call.”

Turks of all political affiliations are breathing a sigh of relief, hoping that the verdict draws a line under the political tensions which have come to boiling point over the summer months.

Sedat Laciner, the director of the International Strategic Research Organisation (USAK), said: “If the constitutional court had made the reverse decision, I think the instability in the country would increase too much.

“I think it [the verdict] will ease many problems with the economy, with Turkey’s external relations with the European Union and the Middle East and thirdly political problems will be solved more easily.”

As many analysts confess, the verdict, like the case itself, was not a legal one but a political one designed to heal the rift between the AKP and secularists who fear that the party and Recep Tayyip Erdogan, the prime minister, are trying to bring Sharia to the country by stealth.

“This is a very strongly worded warning for the AK party.

“Erdogan must be in a very difficult position now because he has to accept that he made errors. Now he has to listen to what opponents say, what secularists say and try to soothe their worries,” argues Kanli.

It is clear that, despite the fresh momentum provided for reform by the verdict, many problems remain.

The terrorist attack in Istanbul earlier in the week linked to the Kurdish Workers’ Party (PKK), is a strong sign that divisive issues are yet to be addressed.

Many analysts agree that other polarising issues such as the headscarf and the Ergenekon investigation into an alleged ultra-nationalist coup plot led by opposition leaders, members of the military and the judiciary have to be tackled by the AKP.

Baydar argues that although this is “a landmark decision” which demonstrates that the judiciary is willing to take a more liberal approach to party closures, “the same problems of sticking to the Turkish style of secularism”, remain.

While the AKP, and Erdogan in particular, are being urged to adopt a more conciliatory approach, many fear that the secular opposition will continue to foment tension.

Laciner cautions that the main opposition, the Republican People’s Party (CHP), may not move on from this verdict.

Denis Baykal, the leader of the CHP, has already reacted to the verdict by arguing that it proves that the AKP are anti-secular and anti-constitutional.

“The weakness in their political position forced these opposition parties to use other tools like the military or the courts,” argues Laciner.

“I think the CHP will not change their attitudes. After the verdict we can see that they will try to increase the tension in Turkey. The problem is they have no other tool than the army and the court,” he concludes.

With a network of secular forces in opposition to the AKP still in place, Erdogan will have to tread a fine line over the coming months.

While Hasim Kilic, the leader of the constitutional court, urged parliament to address the issue of constitutional reform to reinforce the democratic structures of the country, it seems unlikely that any major legislation will pass in the near future.

“They will slightly change the constitution I think and make it more difficult to close parties but Turkey needs much bigger and more complicated constitutional changes. However, this will take time,” Laciner said.

In the meantime, the AKP will have to build a broader consensus for its reform agenda.

As many observers in Ankara point out, the ball is now firmly in Erdogan’s court.

Many analysts see this as a golden opportunity for the prime minister to strengthen Turkey’s democracy and build a broad political consensus but if he fails to reach out to his secular opponents the consequences could be severe.

As Kanli warns: “Next time he will have no chance.

“The court served the AK party a very strong warning showing it the yellow card and telling it that the red card is in the upper pocket and can be shown at any moment.”

Patrick Wrigley is a freelance journalist based in Istanbul. He writes extensively on Turkey and the Middle East 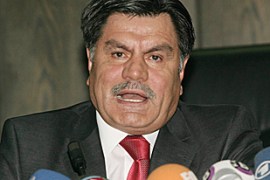 Court rules against banning AK party for anti-secularism but cuts state funds to it.