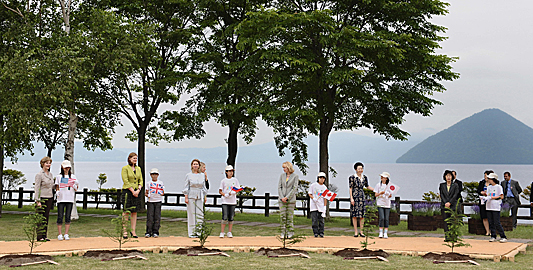 The first ladies planting trees in a memorial park in Toyatown, Japan [AFP]

So the G8 circus tent is packed away for another day.

But this time many are wondfering just what was achieved, if anything, over the past three days of talking.

Was it just a lot of hot air and a chance for the leaders and their wives to have their photographs taken at every available opportunity?

The truth is, it is very difficult to know.

Information from the summit was drip-fed to journalists who were 30km away from Fortress Windsor – that is the hotel where the G8 leaders were holed up surrounded by 21,000 police officers.

The Japanese organisers used the security angle as an excuse to keep the leaders isolated from the media, but no one believed that.

The Japanese made sure no one knew anything about the exact agenda either.

So everybody spent most of the summit guessing – and that does not exactly make for accurate reporting.

We do know that the leaders wives were taught how to fold a kimono and how to make a cup of tea, which they dutifully smiled through while carefully hiding their real reactions which must have been to wonder at how incredibly condescending their hosts were acting.

Their husbands meanwhile were considering how to make the world a cleaner, safer and better fed world – we think they were anyway!

Before he arrived, George Bush, the US president, had said he wanted to go mountain biking and probably did.

While Silvio Berlusconi, Italy’s president, was caught blowing kisses to Japanese girls, Dmitri Medvedev, the Russian president, and Gordon Brown, the British prime minister, had a row about spies.

Nicolas Sarkozy, the French president, wanted to invite new members into the club but Japan threw a hissy fit.

They were deeply worried that new members might push it off the big player’s table.

Nobody was quite sure what Canada did.

Oh and what about the business of the day? Well the big story was the G8’s attitude to climate change. Was Japan going to show world leadership on greenhouse gas emissions?

There was, however, some “significant progress” made on greenhouse gas emissions – according to Angela Merkel, the German chancellor. “Significant” perhaps because last year there was only a vague promise to do “something”.

And that just about sums up the effectiveness of the G8.

By then Bush will be 104, Stephen Harper, Canada’s prime minister, will be 91 and Yuseo Fakuda will be 114 years old.

And to think Japan spent $500 million on a conference to achieve so little.

According to Oxfam, the money spent was enough to provide 100 million mosquito nets in developing countries or a year’s worth of HIV treatment for four million people.

The last time Japan hosted the G8 eight years ago there was an eruption from the volcano Mount Uso to talk about.

This year there was an earthquake in the southern island of Hokkaido that coincided with the summit.

Twenty per cent of the world’s earthquakes happen in Japan but nobody could see any seismic shifts in policy at this G8.

Roll on Italy next year. 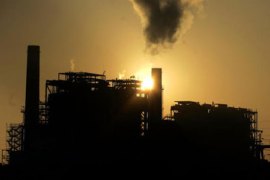 Rich nations say they will consult with 200 countries in bid to halve emmissions by 2050. 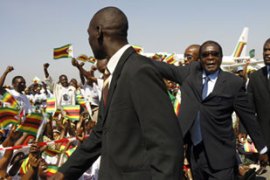 “Further steps” against president Robert Mugabe are on the table, rich nations say.