Peter Mandelson, the European Union trade commissioner, said the talks collapse was “a very painful failure and a real setback for the global economy when we really needed some good news”.

His comments were echoed by Jeremy Hobbs, director of Oxfam International, who said in a statement that the failure was “a major disappointment” coming “at a time
when food and fuel prices are high and the global economic outlook is uncertain”.

“A decent trade deal could have given them [the poor] a chance to prevent worsening poverty,” he said.

Al Jazeera’s Rob Reynolds said the failure seemed to reflect a growing feeling against trade agreements around the world.

But in the US, with both candidates in the upcoming presidential election being cautious about freer trade as it is often equated with jobs going overseas, the failure could have a dangerous outcome if it turned towards protectionism, our correspondent explained.

The talks were launched seven years ago in Doha, Qatar, but have repeatedly stalled amid deep divisions between rich and poor nations.

It is not clear when the talks will resume, although Celso Amorim, the Brazilian foreign minister, said it could take three or four years.

Mandelson said he saw no real chance of resolving core issues in the foreseeable future, and the forthcoming US elections and a change in the leadership of the EU Commission could sideline the talks or see priorities change.

Susan Schwab, the US trade chief at the talks, said Washington would keep its offers in the world trade talks on the table despite the collapse and is hoping other countries are more ambitious to revive them.

Talks stalled over a “special safeguard mechanism” – a proposal to let developing countries raise farm tariffs in the face of a surge in imports or a collapse in prices.

Developing nations such as India say they needed the measure to protect millions of subsistence farmers from market uncertainty created by opening up their borders.

However, the US feared its own farmers would lose new markets just as it made painful cuts in its farm subsidies and accused China and India of insisting on allowances to raise farm tariffs above even their current levels.

That violates the spirit of the trade round, the US and other agricultural exporters argued, because it is supposed to help poorer countries develop their economies by boosting their exports of farm produce.

Kamal Nath, India’s commerce minister, rejected the claim, saying “the US is looking at enhancing its commercial interests whereas I am looking at protecting the livelihood of farmers”.

Developing country food exporters such as Costa Rica and Uruguay also said the measure would have cut them off from key markets and even reduced existing trade.

European officials said the failure also killed off a deal that had been forged on Sunday to change the EU’s banana imports regime, which gives preferential treatment to African, Caribbean and Pacific nations at the expense of Latin American producers such as Ecuador and Costa Rica.

The move sparked anger among Latin American nations, with Eduardo Egas, Ecuador’s deputy trade minister, saying Ecuador – Europe’s biggest market for banana exports – would “demand that they stick to what was agreed on”, Reuters reported. 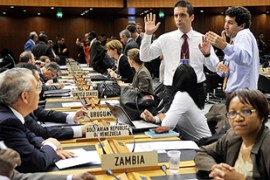 US accuses China and India of holding up WTO talks over protection for farmers. 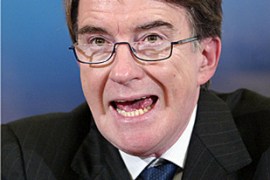 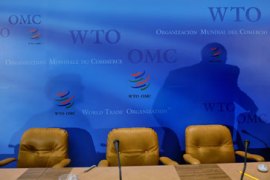 Timeline: Disagreement at the WTO

Nearly seven years of negotiations have failed to result in an agreement.