“Peru has advanced, but it is now time for the poor to advance the most,” he said.

Dozens of protests, strikes and blockades have erupted this year in the South American country.

A former left-winger, Garcia is now a supporter of free markets, welcomes foreign investors and has signed a free-trade deal with the US.

Though some Peruvians have benefited since he took office two years ago, workers and the poor are now demanding a bigger share of an economic boom that is in its seventh year.

Growth reached nine per cent last year, but inflation has eroded support for the government.

The president has blamed the country’s problems on prices for imported wheat and oil that have more than doubled and pushed up annual general inflation to around five per cent.

Food price inflation has been rising twice as fast as other goods.

Elmer Cuba, an economist at Macroconsult “the government has made big strides on the economic front over the past two years, but it has lagged on social issues”.

“This is why a large sector of the population is unhappy,” he said. “This has created an environment of anxiety and protest.” 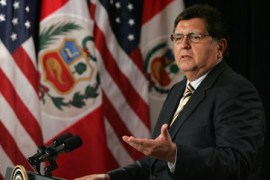 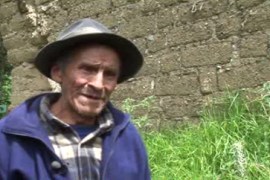 Al Jazeera visits an Andean village struggling with effects of past wars.