At least one million people are expected to visit the Kadhimiya shrine in northwestern Baghdad for the Shia pilgrimage, which climaxes on Tuesday.

Iraqi security forces have increased security in the area, including a team of female guards to specifically search women.

But there were too few women guards to search people along the procession some 9km southeast of the shrine and the attacks took place there.

“At about 8am [05:00 GMT] three female suicide bombers detonated themselves among pilgrims heading to Kazimiyah,” Brigadier General Qassim al-Moussawi, Baghdad’s military commander, said in a statement posted on his website.

Television pictures showed police, firemen and other workers washing blood and clearing debris from the street at the scene of one of the blasts in Baghdad.

Police and health officials said that most of the dead were women and children.

“I heard women and children crying and shouting and I saw burned women as dead bodies lied in pools of blood on the street,” Mustapha Abdullah, a 32-year-old man who was injured in the stomach and legs, said from hospital.

Taher Abd-Noor, one of the pilgrims, told the Reuters news agency: “These blasts that happened today will increase our determination to finalise this ceremony … and defeat terrorism.”

It was the deadliest attack in Baghdad since June 17, when a lorry loaded with explosives blew up in Hurriyah district killing at least 63 people.

Monday’s violence in Baghdad followed the deaths of seven Shia pilgrims in the city’s south the previous day as they were making their way to the Kadhimiya shrine on foot.

In Kirkuk, thousands of people had been protesting against the draft law, an earlier version of which was opposed by Kurdish MPs and rejected by the president and vice-presidents.

Witnesses said the explosion caused a stampede as people rushed for safety.

Mosques called for people to give blood, while television footage showed Kirkuk’s main hospital packed with wounded, some lying on a floor slick with blood because of a lack of beds.

Police said another bomb was found in a car, which was about to explode near the protesters, but it was dismantled.

A curfew has been imposed on Kirkuk, which is home to Kurds, Turkomen, Arabs and other smaller ethnic groups, until Tuesday morning.

Although not part of the autonomous Kurdish area in the north, many Kurds see the northern city as historically Kurdish.

Fereydun Rafiq Hilmi, a Kurdish analyst, told Al Jazeera that there was a sizeable level of discontent between the Kurdish, Arabic and Turkmen communities in the city.

“The situation there is getting worse … and there have been threats by some politicians that the situation will lead to a bloodbath in Kirkuk if the Kurds force through their will,” he said.

Before the event, Iraq officials had said they expected many more people to attend this year’s pilgrimage in Baghdad, which marks the death of one of Shia Islam’s 12 Imams, because of improved security.

Violence has fallen to four-year lows, with al-Qaeda now mainly confined to the country’s north after being pushed from former strongholds in Baghdad and Iraq’s west.

“The United States condemns the violent attacks on innocent Iraqis. We urge the Iraqi people and government to respond with calm  determination to the threat from violent extremists who seek to destabilise the country,” Gordon Johndroe, national security council spokesman, said.

Other Shia religious events in Iraq in recent months have passed relatively peacefully.

The Kadhimiya pilgrimage was marred in 2005 by one of the worst losses of life in a single incident since the 2003 US-led invasion, when rumours of a bomb attack triggered a stampede among pilgrims crossing a bridge leading to the shrine. 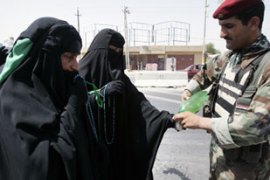 Seven men attacked on their way to a Shia Muslim festival in Baghdad.