He said a policy that locks away asylum seekers indefinitely while they go through the often complicated and time-consuming process of applying for refugee status was no longer acceptable.

No opening of gates

Evans said he would soon receive a departmental review of the cases of about 380 people who are now being held in detention and that the new policy would apply in each case.

Since taking over the immigration portfolio last year, he said, he had already reviewed the cases of 72 detainees who had been held for more than two years.

Of those, 31 should not have been detained and were on the way to obtaining visas, 24 would be deported and 17 people were still subject to legal proceedings, he said.

Asylum seekers arriving by boat will still be held at Australia’s Christmas Island off the north west coast but with the aim of resolving their cases in the shortest time possible, Evans said.

Australia has long been a destination for people from developing countries.

In recent years, the majority of asylum seekers originate from Iraq or Afghanistan.

The government has already scrapped the highly criticised “Pacific Solution” under which refugees were sent to offshore detention centres in remote islands in the Pacific, without any access to the Australian legal system. 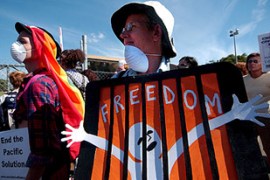 Myanmar refugees first to get asylum as government winds up ‘Pacific Solution’.

Bitter fighting between Afghan government forces and its Taliban opposition is forcing the United Nations to shut down a refugee camp, leaving thousands of Afghans stranded, a spokesman said on Thursday.