Television footage showed rescue personnel wading through waist-deep waters to rescue people from their homes in Hualien in eastern Taiwan, where the typhoon made landfall.

The island is frequently hit by tropical storms and typhoons between July and September, often causing casualties in mountainous regions prone to landslides and flash floods. 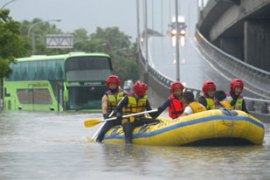