Keith Rockwell, a WTO spokesman in Geneva, told Al Jazeera that the extended talks followed progress by Indian negotiators, which included a safeguard mechanism that would enable India to protect products that faced import surges.

India, which has pushed hard for a better deal for developing countries, said it was not satisfied with the proposals put forward before Saturday’s negotiations.

Ujal Singh Bhatia, India’s WTO ambassador, said before the talks: “We have brought many goodies and we expect to receive new goodies. And if we don’t, we will go back with the same goodies that we came with.”

Rockwell said a “compromise” had been achieved.

“With 153 countries trying to agree to consensus on certain topics – without compromise, there’s nothing,” he said.

“It’s not about making decisions here, but about signalling intentions in terms of opening markets to foreign service providers. It went quite well, and I think ministers are pleased.

“There are outstanding issues. There are some issues that pertain to the poorest companies – cotton subsidies for example; the erosion of trade preferences.”

“We are by no means finished,” he said.

Europe’s trade negotiators were encouraged to press on with the deals by most EU countries, in a bid to rescue a world trade deal, but France, Italy and some others expressed concern about how the talks were shaping up.

The Doha negotiations for a global trade deal were launched in 2001 with the aim of boosting the world economy and helping to fight poverty.

The chances of a long-elusive breakthrough were almost written off earlier this week given the deadlock in the talks, but they improved on Friday when new compromise proposals were welcomed by several key WTO players.

Mandelson told reporters on the sixth day of intensive talks: “There are still potential potholes in the road … [And] we will return to the “green room” tomorrow with the backing of EU member states to work on this emerging deal.”

Without a breakthrough now, the talks risk being frozen for a further another two years while the United States and the European Commission change administrations and India holds elections.

A few EU countries, including current EU president France, opposed the proposals as a basis for further talks when Mandelson briefed the bloc, according to officials who attended the meeting.

Mandelson negotiates trade deals for the 27-country EU, but individual countries have the power of veto over a final deal.

The British commissioner has come under attack from Nicolas Sarkozy, French president, for offering too much on agriculture and getting little in return on industrial goods, key to European exporters of cars, chemicals and textiles.

Silvio Berlusconi, the Italian prime minister, said on Saturday he and Sarkozy had “deep concern” about the proposals and would remain in touch as the talks continue.

Ewa Bjorling, Sweden’s trade minister, said his country would accept the package now on the table.

Mary Coughlan, Ireland’s deputy prime minister, said: “There is considerable disquiet and discontent [among EU countries] on a number of the specific aspects of it.

“We have a couple of issues and one, of course, is agriculture. And we don’t see the balance in Nama [trade in industrial goods], and we haven’t seen services at all as of yet.”

“Absent of that, these countries have the freedom to raise their support to levels that could be extremely injurious to farmers in the developing world.

“If you look at the tariff cuts on products of interest to developing countries, they are profound,” Rockwell said.

“And for the least developed countries, there are special packages that would eliminate all tariffs, all quotas on 97 per cent of the products that are shipped to the developed world.”

Mandelson said he and Mariann Fischer Boel, the European agricultural commissioner, “were well satisfied with the backing that we received.”

Most EU ministers said “it would be very, very regrettable and a serious loss for the world if the Doha round were to fail.”

One diplomat said that the talks, originally scheduled to end on Saturday, had been extended to July 30 but a WTO spokesman said there was no formal end-date.

Mandelson said the Lamy compromise was “not beautiful, but it’s finally put together what will be a genuine boost for the world economy”.

But Rob Davies, the South African deputy trade minister, was more sombre than that.

“Even if we reach an agreement … I don’t think we go out and can tell the world that this is an outcome that is going to solve the development problems of the world. It certainly won’t.

“It will fall far short of that,” he said. 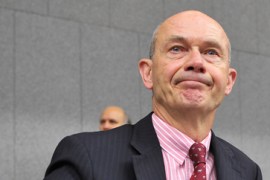 Proposals drawn up by Pascal Lamy which led 153 negotiating countries to extend the Geneva talks.