Thousands of people filled the streets of Santiago de Cuba, the birthplace of the Cuban revolution where Raul Castro made his address, to mark the anniversary events.

Castro has already implemented a raft of changes since his brother Fidel stepped down in February, after nearly 55 years as president.

Raul Castro, 77, told the Cuban parliament on July 11 that he would examine social and economic issues in his Revolution Day address.

But Levin said that Castro simply called on Cubans to be patient in Saturday’s address.

“He sent a message that people need to tighten their belts but also that efficiency in the country needs to improve,” she said.

“He talked a lot about infrastructure; how the [government] is making improvements to roads, water, bridges and so on.”

Raul’s address comes as analysts look for signs whether Cuba is shifting towards a market-based economy after more than half a century of being under a command economy.

Castro’s government has in recent months allowed Cubans to buy mobile phones and to stay in hotels previously reserved for foreigners.

Other policy changes, such as the right to own private taxis or farmland and the lifting of salary ceilings, have been approved but are yet to be fully implemented.

Cuba still experiences shortages of power and food but electrical outages have become rarer and shorter.

In his July 11 speech to parliament, Raul Castro permitted vacant farmland to be placed in private hands.

That policy has been seen as the biggest change since the new president took power, but Washington has called Castro’s policies “cosmetic”.

The US and Europe has also called on Cuba to release political prisoners and allow Cuban civilians to express dissent.

Vicki Huddlestone, a former US mission chief to Cuba, said Raul Castro’s address did not contain any significant shifts in policy.

“Raul [was] his usual rather dull, pragmatic self. Probabaly the most important thing that happened today was the location and the celebration of Fidel,” she said.

“I think getting the infrastructure right is inmportant to Cuba and to Raul. It symbolises his commitment to improve the economy. But this is very much what the Cuban hierarchy wants – slow and steady.”

The Revolution Day celebrations are centered on Santiago de Cuba, where the Castros and their supporters launched their campaign to overthrow the previous regime on July 26, 1953.

They succeeded in 1959, carrying Fidel Castro into power. Fidel held power firmly until July 2006, when ill health prompted him to hand power to his younger brother. 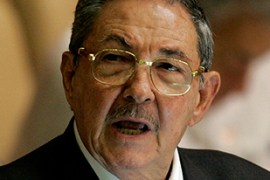 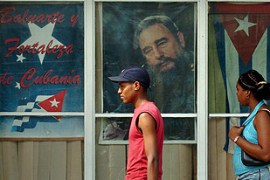 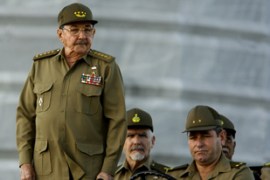