If confirmed, it would be one of the highest casualties suffered by the Taliban in recent weeks.

A statement from Nato-led forces in Afghanistan was, however, less clear about the numbers of casulaties.

“Initial reports indicate that a small number of ANP [Afghan National Police] officers have been killed and wounded and the number of insurgents killed is in double-digit figures,” the statement said.

The Taliban fighters had reportedly tried to capture the Spera district centre, 15km from the border with Pakistan, opening fire on police with guns and rocket-propelled grenades early on Sunday morning, Nato said.

Police and soldiers from the International Security Assistance Force (Isaf) then surrounded the attackers and called air raids consisting of heavy machine-gun fire from helicopters, an Isaf statement said.

“Some insurgents attempted to take cover in a nearby building that helicopters then struck with missiles.

Jamal said that the air raids were later halted to avoid civilian casualties as the Taliban fighters moved into villages.

A Taliban spokesman told Al Jazeera that it had launched an operation to take the district centre, but denied that any of the group’s fighters had been killed.

Afghanistan’s military and Nato-led forces in the country are facing a resurgent Taliban seven years after the movement was forced from power by a US-led invasion in 2001.

The number of attacks in eastern Afghanistan has reportedly increased by 40 per cent so far this year from the same period last year.

Shortly after the battle, a suicide bomber blew himself up in an another area of Khost.

The attacker entered a tent used by guards in charge of security for a road construction company, killing one person and injuring six others, officials said. 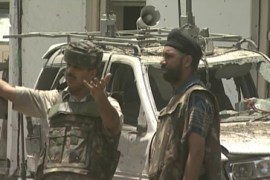 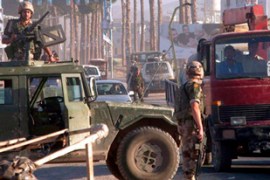 Four civilians killed and three wounded after failing to stop at checkpoint.