British media reports on Saturday said Brown was facing mounting calls from his Labour Party colleagues to quit, after a third crushing by-election defeat in as many months on Thursday and polling plunged to new lows.

The Independent newspaper said it was a bad time for him to meet “arguably the world’s most popular politician”.

Obama’s national security adviser, Wendy Morigi, said late on Friday that the Illinois senator had enjoyed his previous discussions with Brown, whom he met in Washington in May with his Republican Party rival, John McCain.

He “looks forward to meeting with him again to discuss shared  security challenges in Iran, Iraq, Afghanistan, and Pakistan. He  also expects to exchange views on climate change and  non-proliferation,” she added.

Talks with Blair and Cameron – whom Obama may have to deal with if Brown goes and he becomes the first African-American US president – will be on “shared challenges” in energy, climate change and the global economy, she said.

Obama left France on Friday where he was greeted by hundreds of supporters outside the presidential palace in Paris, before holding talks with Nicolas Sarkozy, the French president.

At a joint news conference following their discussions, Obama said Iran should not wait for a new US president to be elected to resolve its dispute with the West over its nuclear programme.

He said: “Iran should accept the proposals that President Sarkozy and the EU … are presenting now. Don’t wait for the next president.”

The comments came after world powers warned Iran has only a fortnight to respond to their latest offer seeking to end a five-year crisis over its nuclear programme, which Tehran claims has peaceful ends, but which others fear masks nuclear weapons ambitions.

Obama also said his recent trip to Afghanistan had showed him that the US needs to send more troops there and that the world must “finish the job” in defeating the Taliban.

He said the US needed to send at least two additional brigades and urged a greater commitment from Nato allies.

The French president said that there had been a “tremendous convergence” of views in their discussions. 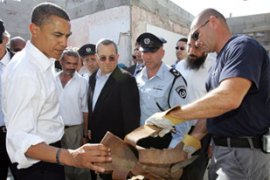 US presidential hopeful to deliver speech on US-European ties as he seeks to boost his foreign-policy credentials. 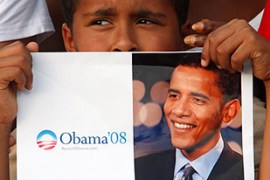 Calls for action to “defeat terror and dry up the well of extremism that supports it”.