Shops in the area have closed, while many families have evacuated their homes near the main battle zone and taken refuge in schools.

“We left everything behind. Now we are depending on the kindness  of people and charity organisations for help,” Ali Darwish, a Bab al-Tebbaeh resident who spent the night sheltering in a classroom without electricity, said.

“We are anxiously awaiting the army to bring back calm and stability, so we can go home. The situation in the school is unbearable.”

Fighters from the rival communities fought with rocket-propelled grenades and automatic weapons throughout the night despite a ceasefire that was to have taken effect at 15:00 GMT on Friday.

“The army has sent reinforcements to the battle zones to secure the ceasefire and the army command has promised us to firmly respond to any violation of the ceasefire,” Mohammed Abdel Latif Kabbara, a Sunni MP of the parliamentary ruling majority, said.

Bab al-Tebbaneh is a stronghold of the anti-Syrian parliamentary majority while the inhabitants of Jabal Mohsen are mainly supporters of the Hezbollah-led opposition.

Alawites are an offshoot of Shia Islam who revere Imam Ali, the cousin and son-in-law of the Prophet Mohammed.

Tensions between the two communities date in Tripoli back to Lebanon’s 1975-1990 civil war.

The latest clashes between the two sides have killed at least 23 people and wounded more than 100 since June.

A protracted political conflict between the sides was largely resolved in May by a Qatari-mediated deal.

But the groups  are now at odds over the policy statement of a national unity government which was finally formed on July 11 after weeks of debate over which party would control which government portfolio.

The latest fighting comes ahead of a parliamentary vote of confidence which would enable the government to be officially installed.

However, the fighting in Tripoli casts a shadow over the deal that ended a bitter political conflict between Lebanon’s Sunni-led governing coalition and an opposition alliance led by Hezbollah, which is close to Alawite groups in Tripoli. 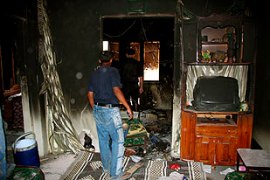 Latest clashes between sectarian factions casts a shadow over peace deal in Lebanon.