The report comes as the People’s Armed Police News said “international terrorist forces are itching to strike with terror attacks against the Beijing games, and hostile domestic forces’ disruption and sabotage activities against the games are steadily unfolding”.

Chinese officials have said their main Olympics security worries are focused on separatists seeking an independent Uighur homeland in the country’s far west Xinjiang region and campaigners for an independent Tibet.

Human rights critics say China has grossly exaggerated the security threats from Uighurs and Tibetans to justify harsh control in those regions.

Chinese authorities have vowed to prevent attacks or “political incidents” from disrupting the Beijing Olympics which run from August 8-24.

Shanghai police have been put on a “crisis” footing as part of a campaign to ensure public safety during Olympic football matches in the city next month, said Xinhua.

Shanghai will host 12 Olympic football matches during the games and the stadium has been closed for security checks since July 20, with armed police conducting round-the-clock patrols.

Firefighters, engineers and medical staff would be deployed to the stadium to prevent bomb blasts and nuclear and biochemical attacks, Xinhua said. 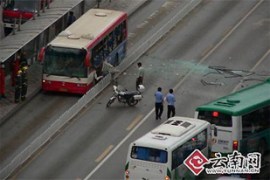 Two die in blasts on Kunming buses as China steps up Olympic security. 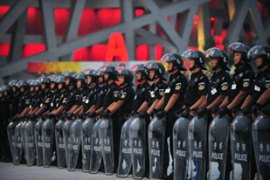