More Taliban fighters have reportedly been killed in a district that the anti-government group captured three days ago, a defence ministry spokesman said.

Afghan soldiers backed by Nato ground and air support launched an offensive in the remote Ajristan district of central Afghanistan’s Ghazni province, killing at least 15 fighters, during an operation to retake control of the area, an Afghan official said on Thursday.

Ismail Jahangir, a government spokesman, said: “At least 15 Taliban have been killed and several others are wounded since [Wednesday].”

The operation continued for a second day on Thursday, with the troops able to recapture the district headquarters compound but still fighting for wider control, Jahangir, a government spokesman said.

The Nato-led International Security Assistance Force (Isaf) said: “The joint operations began with a co-ordinated air strike on Taliban fighters, inside Ajiristan. Several insurgents have been killed and wounded.”

Ajiristan was previously captured by the Taliban in October 2007, and was retaken the following day when at least 300 security forces moved into the district centre.

The Taliban have captured several mainly remote districts in the past but have not been able to retain hold of them for long, although there are a handful in the southern Helmand province, that security forces admit are in rebel control.

The fighting in Afghanistan meanwhile continued to take its toll on international forces. In the latest loss, a British soldier was killed in southern Afghanistan, the UK defence ministry said on Wednesday.

A ministry spokesman said no further details were immediately available. 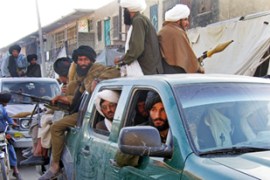 Abductions come amid deadly clashes in Kandahar and torching of schools near Kabul.

US troops killed in Afghan attacks

Two US troops have been killed in separate attacks in southern and eastern Afghanistan, just over a week after the country held landmark elections.