Britain, China, France, Russia and the US – the five permanent UN Security Council members – plus Germany have offered to help Iran pursue a civilian nuclear programme in return for suspending enrichment.

They want Tehran to refrain from installing more uranium-enriching centrifuges in exchange for a block on further sanctions – the so-called freeze-for-freeze approach.

Iran is already facing three sets of UN Security Council sanctions for continuing its nuclear work, which the West says is aimed at making nuclear weapons.

But Iran denies that it is looking to produce a nuclear bomb and says its programme is aimed at producing electricity.

Ahmadinejad said the US presence in the Geneva talks was a “positive step” but he said that Iran would not change course, despite the threat of further sanctions.

“The Iranian nation does not value your threats. You are mistaken if you think you can force this nation to back down with sanctions, threats and pressure,” Ahmadinejad said.

He advised US officials “not to ruin your positive step with irrelevant comments and a colonialist language”.

Ahmadinejad’s latest statement comes after the US sent William Burns, an under-secretary of state, as its envoy to negotiations between Saeed Jalili, Iran’s chief negotiator, and EU officials in Geneva last week. 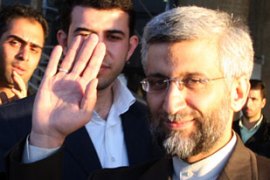 US decision to send senior diplomat to Jalili-Solana meeting seen as a major policy shift.