Many Bulgarians, frustrated by rampant corruption and poverty in their own country, have welcomed the EU’s decision.

A recent poll by the Alpha research institute indicated nearly 40 per cent of Bulgarians approved of EU pressure on the government via financial sanctions.

A total of 28 per cent favoured purely political sanctions without suspending money, while 16 per cent estimated the fight against crime and corruption was “a domestic problem”.

Boyka Naydenova, a beautician in the capital Sofia, said: “If EU subsidies have to go into bottomless pockets, let Brussels axe them.”

The two EU reports on Bulgaria, one on funds and the other on judicial reform and the fight against corruption and organised crime, were the most scathing criticism ever levelled by Brussels at a member state.

Unlike fellow Black Sea newcomer Romania, which was criticised in a separate report on judicial reform, Bulgaria was subjected to the financial sanctions.

Laitenberger gave no overall figure for the suspended funds, but commission officials said the amount frozen was more than $786.7m.

Sofia’s poor handling of EU money was first uncovered in January when a newspaper revealed that Veselin Georgiev, the government’s road agency chief, had granted contracts worth hundreds of millions of euros to his brother’s company.

Georgiev was forced to resign and the EU partly blocked infrastructure money.

In February, Bulgaria and Olaf, Europe’s anti-fraud agency, broke up a criminal ring for embezzling almost $12m of pre-accession farming aid between 2005 and 2006.

But the case dragged on for months and a recent Olaf report, leaked to the press, hinted that high-ranking officials might be hindering the trial against Lyudmil Stoykov, who is accused of being the businessman behind the ring.

This was confirmed by Georgy Parvanov, the Bulgarian president, although he denied protecting Stoykov.

“The imposition of strict rules is for Bulgarians one of the major advantages of EU accession.”

Last week, Eurobarometer, which performs public opinion surveys on behalf of the European commission, published its latest report on Bulgaria.

It showed that public confidence in Bulgaria, regarding the government, police, army and judiciary, was at its lowest point since the country joined the EU in January 2007.

Meanwhile, confidence in EU institutions had surged, with 51 per cent of people saying they trusted the European commission.

Many Bulgarians say corruption is not only corroding power but also damaging their everyday life, including the healthcare, education, police and judiciary sectors.

Seventy per cent of people polled by Alpha said corruption had grown over the past few years.

And with Bulgaria failing to jail any high-ranking official for corruption, the media has joined the public outburst in favour of pending EU sanctions.

“The EU signalled a counter revolution,” the Sega daily newspaper said in an editorial, describing the transition to a market economy as “a criminal revolution” that led to “record inflation and feeble purchasing power added to the everyday fear from crime and disgust for power”.

But while freezing EU funds is seen by the majority of Bulgarians as a suitable punishment for those in power, it could mean bankruptcy for several hundred farmers who rely on aid.

“We imported cows from France and equipment from Germany after our project was granted funding from the [EU’s] Sapard programme,” said Stefan Lichev, a farmer from the southeastern city of Yambol.

“But the money was blocked and now we have to reimburse alone a credit of $3m.” 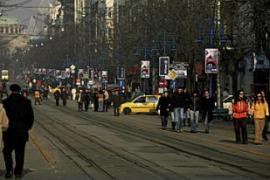