The new agreements allow the Russians to develop new oil deposits in the South American country and pave the way for big infrastructure and engineering projects.

“Venezuela is now the most important partner of the Russian Federation,” Medvedev said.

Chavez is also hoping to sign weapons and security deals on the visit, saying an alliance with Russia is necessary to protect his country from the US.

Reports have said Venezuela is planning to buy 20 Tor-M1 air defence systems and three submarines for a total value of $1bn.

Chavez said he would pursue fresh purchases of Russian arms, “because the North American empire … has plans to invade Venezuela, to disarm Venezuela”.

The Venezuelan president has accused Washington of planning a 2002 coup against him, while the US accuses him of seeking out its enemies – such as Iran and Cuba – as allies.

Chavez also declared, albeit hypothetically, that Russia would be welcome to deploy a military base in his country, if it asked for such.

“If Russia’s armed forces want to be present in Venezuela, they will be given a warm welcome,” Chavez told a news conference in response to a question.

Chavez, who also met Vladimir Putin, the Russian prime minister and former president, said he had felt “strong human warmth” while meeting Medvedev and “personal chemistry immediately appeared between us”.

“We are considering issues linked to our strategic partnership, be it in the energy sector, industry, finance, science and technology, or military issues,” Chavez said.

Medvedev, a former chairman of Russian gas giant Gazprom, added that a proposal to create a group of leading gas producers that would mirror the Organisation of the Petroleum Exporting Countries (Opec) was “not closed”.

Iran and Venezuela, members along with Russia of the Gas Exporting Countries Forum, have both supported the idea of creating a “gas Opec”.

Russia is by far the world’s largest gas producer, controlling a quarter of global reserves. 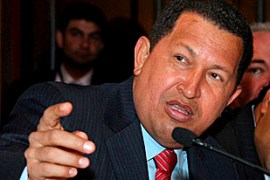