“Sanctions have played a role, we have to keep up that role,” said Bernard Kouchner, the French foreign minister, whose country holds the EU’s rotating presidency until the end of the year.

The EU’s move comes despite the signing on Monday of a memorandum of understanding between Zanu-PF and the MDC in Harare, Zimabwe’s capital.

Negotiators for both sides were in South Africa on Tuesday for a first round of talks following the memorandum.

Edwin Mushoriwa, spokesman for a smaller faction for the MDC also present at the negotiations, confirmed the venue as Pretoria, South Africa’s de facto capital.

“The talks will be held in Pretoria, but far away from town and the media. These will be two weeks of intense discussions,” he said.

Thabo Mbeki, the South African leader who has acted as a mediator, is expected to oversee the session.

The breakthrough between Zimbabwe’s rivals appeared to come after Mbeki’s agreement last week to expand the mediation process to include the African Union, the UN and other officials form the Southern African Development Community (SADC).

Mbeki has been mediating in the crisis for more than a year and had been increasingly criticised for taking too soft a line with Robert Mugabe, Zimbabwe’s president who won an internationally-criticised ‘one-man’ election in June.

Commentators have warned that significant obstacles remain in the path towards forming “an inclusive government”, in Zimbabwe that would include Mugabe as well as Morgan Tsvangirai, the MDC leader.

The signing ceremony in Harare on Monday saw the two leaders shake hands in their first meeting since Tsvangirai formed the MDC in 1999.

In a letter to party supporters Tsvangirai warned “our signatures alone do not guarantee that we will be able to make the most of this opportunity”.

Long-standing bitterness between the two hit new heights during the course of the election run-off, when Tsvangirai was detained on five separate occasions while campaigning and Tendai Biti, the MDC number two, arrested for treason. 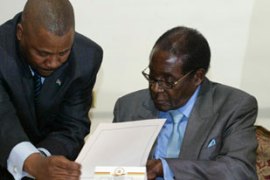