The Tigers said they would take defensive action if the Sri Lankan military disrespected their gesture and carried out any offensives against them.

The Sri Lankan government claims its campaign against the Tigers is going well and on Sunday announced that it had killed over 5,000 Tamil Tiger fighters already this year.

“The government would probably take a rater dim view that the LTTE is declaring a ceasefire when they are apparently suffering such heavy casualties,” Minelle Fernandez, reporting for Al Jazeera from Colombo, Sri Lanka’s capital, said.

Speaking to Al Jazeera, Rajiva Wijesinghe, secretary-general of the Secretariat for Co-ordinating the Peace Process, said: “There is no sign of abandoning terrorism, which I think we will need if we are to move forward to a political soiltuion.

“To have a peace effort, we actually need to talk without resorting to terrorism and we made that clear in the ceasfire. They didn’t return this … they used the ceasefire to attack us even more, which is a pity.

“We have to make sure the Tamils are not under threat.”

Earlier on Monday, Sri Lanka’s military announced it had destroyed 13 Tamil Tiger boats off the island’s west coast as it continued its push against the Tigers’ northern strongholds.

The LTTE said nine civilians, including three children, were wounded in an attack by the Sri Lankan navy and air force on fishing boats in the coastal village of Anpupuram in Kilinochchi district. 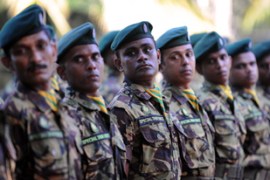 Army says claims it has killed thousands of Tamil fighters this year not exaggerated.