He also emphasised that while he believed security in Iraq had improved, there was still the need for a “political solution” and said the goal was still “to have US troops no longer engaged in combat operations in Iraq”.

“I welcome the growing consensus in the United States and Iraq for a timeline,” he said.

“My view is we can safely deploy in 16 months so that our combat brigades are out of Iraq in 2010.”

Obama, who spent Tuesday morning in Iraq’s al-Anbar province holding talks with tribal leaders, is due to visit Israel and the West Bank on Wednesday.

His talks with King Abdullah will focus on “Middle East issues, particularly the peace process and Jordan’s concerns about the Palestinian cause, as well as the country’s efforts to find a just solution to the problem and establish an independent Palestinian state,” Jordanian officials said in a statement.

Rami Khouri, the director of the Issam Fares Institute at the American University of Beirut, told Al Jazeera that Obama’s visit to Jordan is “largely a process of ratching up his foreign policy credentials”.

“It is his weakest point, and this tour of the Middle East is part of his electoral campaign aimed at highlighting his capability to handle foreign affairs,” he said.

“Jordan is friendly to the US, and I think this visit in particular will not pose too many difficulties.”

On Monday Obama met Nuri al-Maliki, the Iraqi prime minister, for talks in the Iraqi capital of Baghdad.

Obama also met Jalal Talabani, the Iraqi president, and US troops stationed in the country.

Before touching down in Baghdad, Obama had paid a brief visit to the southern Iraqi city of Basra after spending Sunday night in neighbouring Kuwait.

The visit marked the Illinois senator’s second trip to Iraq, and occurs less than four months before the US presidential election on November 4.

Over the weekend Obama also visited Afghanistan, the second front in the US’s so-called “war on terror”, and where the US has more than 36,000 troops stationed to combat growing violence.

John McCain, Obama’s Republican rival for the US presidency, has criticised Obama for only visiting Iraq twice, and said on Monday he hoped the Illinois senator would see during his visit that he had been wrong to oppose the so-called US troop surge in Iraq last year.

“I hope he will have a chance to admit that he badly misjudged the situation and he was wrong when he said that the surge wouldn’t work. It has succeeded and we’re winning the war,” he said.

Obama has called for the gradual withdrawal of US troops at the rate of one or two brigades a month, as well as an end to combat operations within 16 months.

He has said he favours leaving a residual force in the country to provide security for US personnel, to train Iraqis and to counter attacks by al-Qaeda.

The Obama campaign had said his Middle East tour’s aim is to make an on-the-ground assessment of conditions in the region and in Iraq, as well as meeting leaders, whom he has previously criticised for not doing enough to rebuild Iraq. 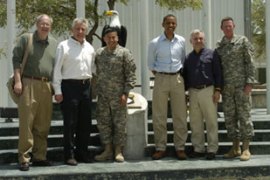 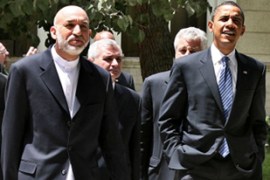