The navy, coastguard and local fire department have begun an air and sea search for the crew.

The US air force said the bomber crashed 15 minutes before the start of the parade.

The B-52 Stratofortress is considered a workhorse of the US air force and was first introduced more than half a century ago.

More than 700 have been built.

It was designed to carry nuclear weapons during the Cold War, but has been a key part of recent US military operations in Afghanistan and Iraq releasing cruise missiles and dropping thousands of tonnes of conventional bombs.

Monday’s crash is the second incident for the US air force this year on Guam, a US military base 6,000km southwest of Hawaii.

In February, a B-2 crashed at Andersen base shortly after takeoff in the first-ever crash of a stealth bomber, costing the military an estimated loss of $1.2bn.

Guam is an important US military base and centre of operations in the Asia-Pacific region. It has been under US control since 1898.

Kuam News, a local television station, reported on its website that Monday’s crash was the fifth involving a military aircraft in a year. 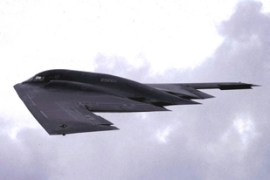 Pilots unhurt after radar-evading B-2 bomber crashes in US base on Pacific island. 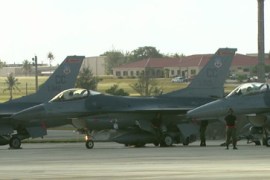 US building up Guam base

Local residents fear for their safety as the US turns Guam into a military hub.

Sailor dies in US submarine accident

A US sailor has died of injuries sustained after a nuclear submarine ran aground in the Pacific Ocean, officials said as the vessel limped back to port in Guam.