Criticising Israel’s move to continue building settlements, he said the whole European Union is very clear about wanting a freeze on settlements.

“Settlement expansion has made peace harder to achieve. It erodes trust. It heightens Palestinian suffering,” Brown said on Sunday.

“It makes the compromises Israel will need to make for peace more difficult.”

Emphasising economics as the key to peace in the region, Brown urged Israel to ease travel restrictions in the West Bank which he said had hindered commerce.

“We have pledged $500m for economic development in Palestine over three years to 2011,” Brown said after the meeting.

“I can announce today a further commitment of $60m, $30m of which we will give as direct budgetary support, bringing our total support to the Palestinian Authority this year to $175m.”

Brown later visited Ehud Olmert, the Israeli prime minister, who said he was “seriously and genuinely” interested in the British prime minister’s “economic roadmap to peace”.

“We genuinely believe that alongside the political efforts which we are making in order to bring forth the peace process at the same time we must build up this basis of trade and business cooperation between our two countries to allow ourselves and them to create a new reality and quality of life,” Olmert said.

On Monday Brown is due to make a speech to the Israeli parliament during which he is expected to warn Iran of further isolation and sanctions if it fails to comply with UN demands over its uranium enrichment activities.

According to advance excerpts of his speech he will criticise Tehran for its “abhorrent” threats towards Israel and promise to increase pressure on Mahmoud Ahmadinejad, the Iranian president, over the disputed nuclear programme .

A spokesman for the British prime minister said Brown did not rule out “extended sanctions in some form on the oil and gas sector”. 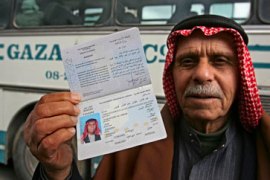 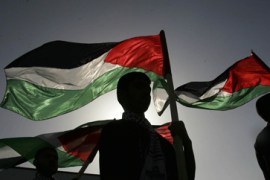 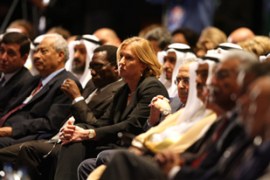 US president says Arab states must “move past their old resentments against Israel”.