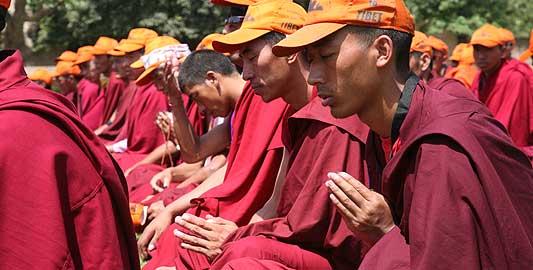 Cultivating compassion, Tibetans pray for the victims of the recent earthquake in China [Annie Kohl]

As the residents of China’s Sichuan province continue to come to terms with the effects of a devastating earthquake which has killed more than 62,000 people, they will find compassion expressed in some unlikely quarters.

Ngawang Khunkyen, one of the many exiled Tibetan monks in India, shares in their sorrow.

“We express our grief by praying. We gather at the temple to recite Tara mantras, praying for a speedy recovery of all those who suffer,” he said from his home in Dharmasala, a city in India that is home to some of Tibet’s most recognised leaders, including their spiritual leader, Tenzin Gyatso, the 14th Dalai Lama.

Tara mantras are a special set of prayers recited when Tibetans pray for the recovery of people who are sick or those who are mourning. As an act of compassion, Tibetans have put aside their differences with Beijing, who they say has stood in the way of their autonomy, in order to pray for victims of the earthquake.

While acknowledging that they cannot forget that China has occupied Tibet since 1950, the Tibetan monks say they empathise with the Chinese families who have suffered.

In the past few months, the exiled community has expressed anger and discontent in the form of protests, hunger strikes, candlelight vigils, and peace marches in response to China’s crackdown on dissent in Tibet.

The Central Tibetan Administration (CTA) reports that as many as 200 Tibetans were killed during the unrest. After two months, exiles are still emotionally charged, but not without a hint of grief.

“After March 10, many people were very angry at the Chinese government,” says Ngawang, “but after the earthquake, [Tibetans] feel very sad for the people who died in China.”

As a refugee monk, Ngawang wakes up at dawn to pray and meditate.

“At five in the morning, I pray for the people who suffer in this world. Until recently, I prayed for all sentient beings. But now, I really pray for China.”

Many would readily dismiss the idea that Tibetans pray for the Chinese; however, in a time when China has suffered from great misfortune, Ngawang sees prayer as its remedy.

Born in Tibet during Chinese occupation, Ngawang has been a monk since childhood. His calm demeanour is often matched by the carefully chosen words he articulates.

In 1993, Ngawang, then 15, participated in a demonstration outside Lhasa.

“We desired human rights and democracy. We told the Chinese government to leave and have the Dalai Lama return to Tibet. We were arrested and I was imprisoned for three years.”

After his release, he sought refuge at a Tibetan refugee settlement in India. He now lives in a refugee centre with fellow Tibetan monks who have endured similar adversities.

With China’s sphere of influence expanding both politically and economically, the Dalai Lama and the CTA believe genuine autonomy is the most pragmatic solution to this decades-old conflict.

The Dalai Lama is optimistic in future dialogue with China, but the hope for amicable relations and diplomatic progress is not his immediate priority.

Instead, a prayer to victims and their loved ones has become paramount.

“I would like to extend my deep sympathy and heartfelt condolences to those families who have been directly affected by the strong earthquake,” said the Tibetan leader in a statement. “I offer my prayers for those who have lost their lives and those injured.”

On May 14, a special prayer session was held for the victims of the earthquake. Tsering Dhondup,  the secretary of the Department of Religion and Culture, requested monks, nuns, and laymen to gather at the Dalai Lama’s main temple.

“The prayers are dedicated for the good rebirth of all those Chinese who have lost their lives in the recent natural calamity.”

Whether or not their prayers are well-received in China, the impact it has on the individual and collective Tibetan spirit is limitless.

“Prayer, in any circumstance, is necessary for spiritual positive fulfilment. It doesn’t matter if you’re from China or Tibet. It is important to preserve this tradition. And it is important for me because I must cultivate compassion for others,” says Ngawang.

The power of prayer

Thubten Samphel, a spokesperson for the CTA, agrees: “We don’t want [earthquakes] to happen to anyone anywhere in the world, be it China or Tibet. We feel deeply for those who are suffering in China.”

In China, the earthquake has marred the nation’s collective spirit.

However, it may be comforting to know that the people who have shared in the grief and prayed for a speedy recovery have been the Tibetans.

Thubten N., a 35-year-old monk, who shares a life story similar to Ngawang, told Al Jazeera: “When we pray, we pray for all sentient beings to enjoy a lifetime of happiness. It doesn’t matter who you are or where you are from. We are all human beings.”