The aim was “a new age in which hope liberates us from the shallowness, apathy and self-absorption which deadens our souls and poisons our relationships”, he said.

Sunday’s Mass wraps up the church’s six-day World Youth Day festival in Sydney that has drawn massive crowds of pilgrims.

It has been watched on television by a global audience estimated to be in the hundreds of millions.

It was delivered at a horse racetrack filled with pilgrims who had camped out overnight.

Benedict flew over the scene early on Sunday in a helicopter to see the gathering.

He later took a slow drive through the crowd, stopping once to plant a kiss on the forehead of a toddler held up to the popemobile’s window.

Pilgrims from more than 160 countries gave him a rock-star welcome, waving the flags of their nations, cheering and chanting: “Benedicto! Benedicto!” (the pope’s Italian name).

The Mass comes a day after Benedict made a forceful apology for the sexual abuse of children by Australia’s Roman Catholic clergy, keeping up efforts begun in the US to publicly atone for what he called evil acts by priests.

In his apology, Benedict said: “I am deeply sorry for the pain and suffering the victims have endured and I assure them as their pastor that I too share in their suffering.”

He said he wanted “to acknowledge the shame which we have all felt” and called for those responsible to be “brought to justice”.

The acts were “evil” and a “grave betrayal of trust”, he said.

But the apology was not enough to satisfy representatives of the victims of clergy sexual abuse, who said it must be backed by Vatican orders to Australian bishops to stop what they say are efforts to cover up the extent of the problem and to block survivors’ attempts to win compensation. 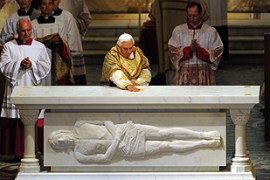 Pope says child sex abuse by the clergy is a great betrayal of trust and shameful.

The taint of sexual abuse has smeared the name of the Roman Catholic church once again as a US archdiocese offered a $55m settlement to hundreds of alleged victims.

But Roman Catholic leader also blames prevalence of pornography in US society. 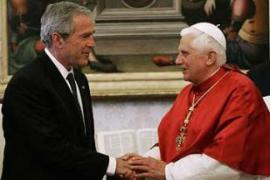 Pope ‘ashamed’ of US priests’ abuse

Pontiff expected to discuss abuse by US clergy during six-day visit.