Soe Aung, from the National Council of the Union of Burma, an umbrella group for Myanmar’s opposition, told Al Jazeera that resentment towards the military government has increased significantly since Cyclone Nargis.

UN plans to end its aid relief flights and scale back the help being given to Myanmar’s victims will worsen the situation on the ground even further.

“It is very important that any aid operation in Myanmar should not stop at any stage because the people are still suffering.

“But more importantly the UN and international aid agencies [should focus on] the forced relocation or forced repatriation of the refugees, the cyclone victims in the area,” Soe Aung said.

“Inside Burma, there are about 6,000 people who remain in three rehabilitation camps. They will be forced to move out early next month.

“The people are very angry in Burma because of the natural disaster but also the man-made disaster which is the military regime, the mismanagement, the mistreatment of the population, in ethnic and urban areas.

“Anger amongst the people is growing and the people may try to attempt to use any method to topple this regime.”

Hundreds of riot police and soldiers were deployed in Yangon as people gathered for the official ceremony marking the assassination of General Aung San.

Unlike on previous occasions, foreign diplomats were not invited to the wreath-laying ceremony.

General Aung San, a hero during the country’s battle for independence, was shot dead with other government leaders during a cabinet meeting in 1947, shortly after Britain granted independence to the Southeast Asian colony.

Flags were at half mast in Naypyidaw, the capital, throughout the day, a state holiday.

Opposition activists have suggested that the military is trying to downgrade the importance of Aung San’s legacy as a way of undermining the popularity of his daughter.

However, diplomats in Yangon said the foreign ministry had informed them that the government intended this year’s ceremony to be low-key because of the cyclone.

Myanmar’s military government had been severely criticised for its inadequate relief response and for holding a referendum on a new constitution just weeks after the cyclone.

Humanitarian groups have expressed concern over the cessation of aid next month, saying that nearly two and a half million survivors are still living without access to adequate food and water.

Security was also increased at the headquarters of the NLD, which said it would hold a separate ceremony.

Last week, the UN Office for Co-ordination for Humanitarian Affairs (OCHA) announced that it was raising its aid appeal to help victims of the cyclone from $201m to $481.8m.

John Holmes, head of the OCHA, is to travel to the Irrawaddy Delta, the area worst affected by the cyclone, next week to assess recovery efforts.

Ibrahim Gambari, a UN special envoy, meanwhile is planning a return visit to Myanmar in mid-August at the invitation of the military government.

Aid groups call for access to victims of storm that has left more than 350 people dead. 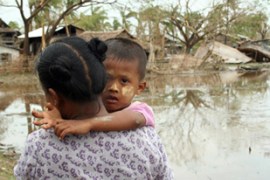 Steep rise in death count as pressure mounts on government to allow in foreign aid. 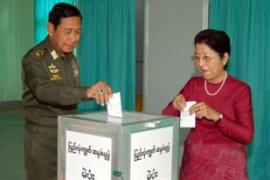