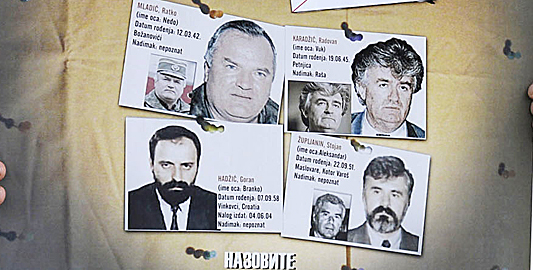 Stojan Zupljanin, bottom right, was one of four Serbs wanted by the UN [AFP]

After nine years on the run, Stojan Zupljanin, one of four fugitives wanted by the UN over war crimes committed in the Balkans during the 1990s, has been arrested near Belgrade, the Serbian capital.

While Serbia wrangles over the formation and direction of its governing coalition – towards Europe or effectively away from it – the European Union has said that the three remaining fugitives must be captured and sent to the International Criminal Court (ICTY) at The Hague, before there is any chance of the country’s full accession to the EU.

Al Jazeera spoke to Bojan Lap?evi?, secretary-general of the Serbian war crimes prosecution office, about his work in bringing the country’s war crimes suspects to justice.

Al Jazeera: What is the role of the Serbian war crimes prosecutor’s office and how effective is it?

Bojan Lap?evi?: The competence of the war crimes prosecutor’s office involves the prosecution of those war criminals who are not sought by the Hague. We are currently handling 40 war crimes cases.

We have prosecuted 123 persons suspected of crimes against 2,156 victims, mostly Muslims.

AJ: How many Serbs have been sent to the Hague? And how many of those were accused of taking part in the killings of around 8,000 Bosniak Muslims at Srebrenica in 1995?

BL: Out of the 46 persons indicted by the International Criminal Tribunal for the former Yugoslavia (ICTY), 42 have been sent to the Hague so far. Altogether 21 persons have been accused of the Srebrenica crime, whereas 19 persons are currently at the Hague.

AJ: What kind of pressure does the UN place on the Serbian war crimes prosecutor’s office?

BL: The United Nations does not place any concrete pressures, particularly not on the institution which I represent. Since the UN is deeply divided along the crucial political issues that are shattering Serbia, there are no tangible pressures on the part of this organisation.

Still, we can talk about co-operation with UN agencies, such as the ICTY. This co-operation is very concrete. Mr Serge Brammerz, the ICTY chief prosecutor, and Vladimir Vuk?evi?, the Serbian war crimes prosecutor, have established a very good professional relationship.

AJ: How important is Serbia’s co-operation with The Hague?

BL: Serbia’s co-operation with the ICTY, which is a UN agency, is of paramount importance. This co-operation reflects Serbia’s wish to do away with its dark past, and to finally turn towards the future.

AJ: What is your response to the Radical Party’s stance that no Serb will ever be sent to The Hague under a nationalist right-wing coalition?

BL: In my belief, this is a very alarming statement, which tends to draw Serbia back into the 1990s, into the time when the Radicals participated in power.

The Act on Co-operation with the Hague Tribunal and internationally binding commitments clearly specify Serbia’s obligations related to the arrests of the remaining fugitives.

If some parties believe that this act should be changed, there are legal procedures which allow them a possibility to try to realise that right.

AJ: What is the Serbian war crimes prosecutor’s office doing to find Bosnian Serb military commander Ratko Mladi? and other fugitives regarding the Srebrenica killings? How is the search structured.

BL: As you may well know, there is an action team in charge of these activities. The team includes heads of the civil and military intelligence agencies and the police director, as well as a political representative, namely Mr Rasim Ljaji?, who is a minister in the government of Serbia. Mr Ljaji? and Mr Vuk?evi? are the action team co-ordinators.

Operational activities aimed at the arresting of Ratko Mladi?, Radovan Karadzic [former Bosnian Serb leader], Goran Hadzic [former president of a breakaway Serb entity in Croatia] and other fugitives are carried out on a daily basis.

Until now action teams have managed to apprehend two army generals. However, the action team’s work won’t be finished before the remaining three fugitives have been transferred to the Hague.

AJ: Has the governing coalition done enough to look for Mladi??

BL: There is sufficient will for the completion of this job, particularly among the democratic structures of Serbia. Still, we are alarmed by the tones coming from the Radical circles, which encourage the fugitives and try to push Serbia back into the dark.

Equally alarming is the lack of determination within some other political parties to face this problem, since, as you may guess, this is an unpopular issue which certainly cannot raise political ratings.

AJ: What do you think about the EU’s condition that Mladi? (and other fugitives) need to be captured and arrested before Serbia’s accession to the EU?

BL: I do not think that any conditions are necessary, because we ourselves are perfectly aware of the necessity and need that all three should be arrested. It is us who are paying the highest price.

In one way or another, the fact that Serbia has not referred the three fugitives costs us more than $1bn, which is to say a possibility of stepping into the future and a better life.

However, such conditionality on the part of Europe is perfectly understandable, since it is a safeguard of the values which are strongly supported by Europe itself.

AJ: How much is Mladi? a political symbol for both pro-EU and nationalist parties?

BL: The Radical Party often sends encouraging signals to Ratko Mladi?, while the pro-European forces emphasise the necessity of him being sent to The Hague.

In my view, Mladi? is the individual who might be responsible for the deaths of 8,000 Muslims in Srebrenica. Thus, his apprehension and referral to the ICTY is the only way in which justice can truly be served.

AJ: What kind of pressure does the EU place on the Serbian war crimes prosecutor’s office?

BL: In order to join the European Union, one condition that Serbia has to fulfil is full co-operation with the ICTY. That condition is perfectly understandable, since it is about the protection of basic civilisation values.

However, we wish to realise this co-operation primarily because of ourselves, because of the fact that we do not want criminals and those suspected of the most serious breaches of humanitarian law to walk free among us.

Likewise, we want this co-operation because of justice for the victims of these crimes.