“The UK will work with the government of Nigeria to identify a training and advisory support package which could help improve Nigerian capability to improve security in the Delta,” Brown said at a news conference.

Unrest in the Delta has reduced Nigeria’s oil output by a quarter, causing it to lose its position as Africa’s biggest oil producer to Angola, according to April figures from the Organisation of Petroleum Exporting Countries (Opec).

Brown added that the high price of oil meant it was necessary to look around the world for where sources of oil can be found.

“One of the areas where we can make greatest progress most quickly is increasing the oil production of the Niger Delta.

“The security training force that we’re talking about will be support for the Nigerians, to be able to have trainers and others who can build up this capacity locally to deal with the problems.

“That’s why the security arrangements that we’re discussing to be done jointly are very important to the future not just of Nigeria and peace there but also to the world energy market.”

British help would focus on river and maritime security around the Delta, which is the hub of Nigeria’s multi-billion-dollar oil and gas industry, Yar’Adua said.

Yar’Adua added that he had asked Brown to lead a campaign at the UN against so-called “blood oil” (oil stolen in the Delta) which he wants stigmatised in the same way as “blood” diamonds.

“I asked for his support to lead a campaign at the UN to track stolen crude and to declare it blood oil just like the Kimberly diamonds so that there is a concerted international effort to ensure that stolen crude is trapped,” he said.

The Kimberly process is a certification scheme introduced in 2003 which requires participants to identify diamonds as conflict-free in origin.

Brown said he would “give what support we can” to international efforts on this.

The deprived Niger Delta has been the scene of a low-level fighting and criminal activity, including kidnapping of oil workers and oil theft, for many years.

Ahead of the talks, Brown said up to 1.5 million barrels of oil a day were lost due to lawlessness in the region. Several foreign firms have left because of security problems.

Thousands of Nigerians have left Bonny, an oil town in the Niger Delta, after fighters threatened people who are not originally from the area.

Five people were also killed and several wounded in in the Delta on Wednesday in fighting between Nigerian security forces and armed men who attacked their boat, an army spokesman said.

Lieutenant-Colonel Sagir Musa, a spokesman for the military task force responsible for security in the southern Rivers state, said about 30 armed men in speedboats attacked a navy boat that was guarding oil facilities. 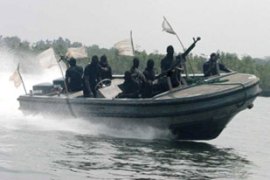 A militant group attacking oil installations in the Niger Delta has said it will widen its range of targets to include more multinational companies.

Chevron has shut down two installations, Shell has evacuated workers and the army was on high alert amidst unrest in Nigeria’s oil-rich delta.