Luis Moreno-Ocampo, a prosecutor for the ICC, cited Omar al-Bashir, Sudan’s president, for genocide, crimes against humanity and war crimes.

The announcement on Monday sparked protests in Khartoum where hundreds of demonstrators accused the ICC of practising double standards and of conspiring against their country.

Mohammed Adow, Al Jazeera’s correspondent in Khartoum, said the feeling on the streets of Khartoum was one of anger.

“The people of Sudan have been voicing their concern and anger. They’re reading double standards in the ICC move and asking why the ICC is not investigating conflicts in other parts of the world,” he said.

“They are saying the ICC move is part of a wider conspiracy against their country.”

Ban Ki-moon, the UN secretary-general, distanced himself from the ICC ruling, saying he was “very worried” over the possible repercussions should al-Bashir be formally accused.

Urging Sudan to ensure the safety of UN peacekeepers deployed in Darfur, Ban said in an interview published in Le Figaro daily that the move “would have very serious consequences for peacekeeping operations including the political process”.

Abdalmahmood Abdalhaleem Mohamed, Sudan’s ambassador to the UN, said the plans to arrest al-Bashir stood in the way of the peace process and that Sudan would ask the Security Council to block Moreno-Ocampo.

“We want the Security Council to tell the prosecutor that our road map … demands that priority be given to the peace process,” he told the Associated Press news agency.

Brian Kelly, a UN spokesman, said the UN has been trying to minimise the risk of harm to its staff by carrying out a number of procedures.

Arab and African leaders have also expressed concern over any attempt to detain al-Bashir for any of the alleged war crimes.

The African Union (AU) expressed reservations over the ICC move and gave warning on “military coups and widespread anarchy”.

Jakaya Kikwete, the Tanzanian president and AU chairman, said that a power vacuum in Sudan “risks military coups and widespread anarchy reminiscent of what is happening in Iraq”.

Bernard Membe, the Tanzanian foreign minister, speaking on behalf of Kikwete, said the AU does “not condone impunity, genocide and violence because we believe in due process of the rule of law.

“But what we are calling for is a deferment in indicting [al-Bashir] because there is a risk of anarchy in a proportion we have not seen in this continent”.

Membe said the ICC “timing is bad” because al-Bashir “has shown compliance to peace demands”.

Consultations are also under way in Addis Ababa for an emergency meeting of the AU Peace and Security Council.

The UN says up to 300,000 people have died and 2.5 million displaced from their villages since the Darfur conflict broke out in February 2003.

Mixed reaction followed the signing of the Iraqi interim constitution as many hailed the step, but top Shia cleric said it is an “obstacle”. 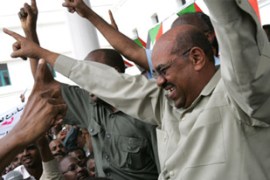 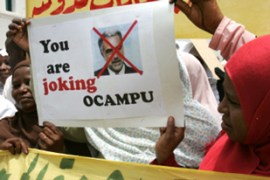 Sudan president set to be indicted 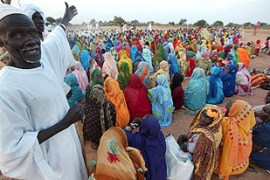