The CTF’s 300-plus page report found that the Indonesian government and military bore “institutional responsibility” for the violence, funding local militias and taking part in the violence themselves.

Yudhoyono’s acceptance of the report marks the first acknowledgement by the Indonesian government of the role it and its security forces played in the violence.

However, Indonesian officials have ruled out making a formal apology.

On Monday Juwono Sudarsono, the country’s defence minister, was quoted by the state-run Antara news agency as asking if East Timor leaders had never themselves violated human rights.

“This case should not be brought before an international court because it is about reconciliation between two countries,” he told the country’s parliament.

In separate statements after the CTF report was released on Tuesday, both leaders spoke of the need to work together in the future, but made no mention of any further action related to the perpetrators of the violence.

Al Jazeera correspondent Marga Ortigas, reporting from Bali, said Yodhoyono and Horta both spoke about the need to put the past behind them and move forward together.

She said that was unlikely to go down well with victims of the violence in East Timor, many of whom say they want to see key offcials held responsible and spending time in jail.

According to the CTF’s report, the people of East Timor were subjected to “gross human rights violations” including murder, rape, torture, illegal detention and forcible transfer and deportation.

It said Indonesian civilian officials provided funding and weapons to pro-Indonesian militias in order to intimidate, threaten and force people to vote for integration with Indonesia.

The East Timorese people vote overwhelmingly in favour of separating from Indonesia, and the country was formally declared independent in May 2002.

“Viewed as a whole, the gross human rights violations committed against pro-independence supporters in East Timor in 1999 constitute an organised campaign of violence,” the report’s authors say in their conclusion.

The commission, however, did not directly name the perpetrators and has no prosecution powers.

No Indonesian military commander or government official has so far been successfully prosecuted over the violence, which Jakarta has blamed entirely on local militias.

In April, Eurico Guterres, a pro-Indonesian militia leader and the only person ever jailed over the violence, was cleared of involvement by Indonesia’s supreme court. 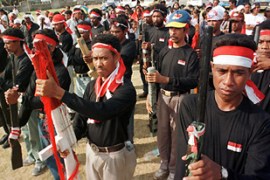 Report blames government and army for wave of deadly violence during independence vote. 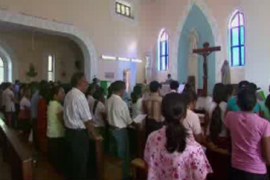 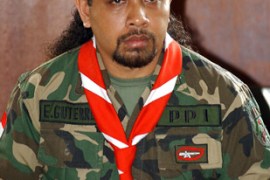 Jailed for East Timor violence but released early and now to run for parliament.

The last United Nations peacekeepers in East Timor are pulling out, ending a mission to stabilise the former Portuguese colony after its bloody 1999 vote for independence from Indonesia.