The protest broke out on Saturday at a camp in Nepalgunj, about 500km west of Kathmandu, the capital.

Initial reports said about 500 riot police officers had taken part in the protest, though later reports put the figure at only 200.

Police officers loyal to the protesters were reported to be watching over the entrances to the camp and shots could be heard, although officials said that no one had been hurt.

Officials say the junior policemen will now be charged with indiscipline.

The incident was the latest in a series of revolts by junior policemen over their treatment by senior ranking officers. 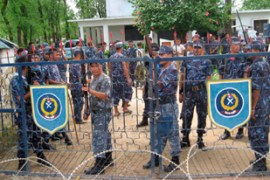