Relations were at their lowest point in decades when Colombian troops crossed into Ecuador and killed a rebel commander earlier this year, sparking a big dispute between the two countries that spread to include neighbouring Venezuela.

Chavez responded by briefly dispatching troops to Venezuela’s border with Colombia, pulling out his ambassador and threatening to cut back trade. Chavez later restored relations.

During disagreement over Chavez’s mediation role with Colombian rebels, the Venezuelan president called Uribe a “pawn of the US empire”.

Colombia, meanwhile, accused Chavez of offering an open-ended loan of at least $250mn to the revolutionary armed forces of Colombia (Farc), charges bolstered by documents Uribe’s government said were retrieved from a laptop at a bombed guerrilla camp.

Chavez denied the accusation, and Colombia’s ambassador to Caracas, Fernando Marin, said the laptop documents are not on Friday’s agenda.

Chavez made reconciliation easier for Uribe when he called on the Farc last month to disarm and give up its hostages, after previously urging world leaders to consider the Farc a legitimate army of fighters.

However, Farc subsequently said that there would not be anymore unilateral releases. And when Colombia’s military rescued 15 rebel-held hostages last week, Uribe’s popularity soared.

“Uribe is strengthened internationally,” while “Chavez has realised he was riding the losing horse” and has expediently adjusted his stance toward Colombia, Rafael Nieto, a Colombian analyst and former deputy justice minister, said.

Chavez is looking to shore up his political support ahead of state and local elections in November, and maintaining a conflict with Colombia could be unpopular among Venezuelans.

According to analysts, Uribe’s political imperative for smoothing over tensions is based on trade.

“Uribe is defending the interests of the Colombian private sector, which has made important investments in Venezuela and which he has to protect,” Adolfo Tayhardat, an analyst and former Venezuelan diplomat, said.

The talks – the first one-on-one meeting between the two since August – are being held at Venezuela’s Paraguana oil refining complex on the Caribbean coast.

Chavez and Uribe to sort out spat

Colombian President Alvaro Uribe has arrived in Caracas to meet Venezuelan President Hugo Chavez in an effort to overcome a dispute involving the capture of a leftist Colombian rebel chief in Venezuelan territory. 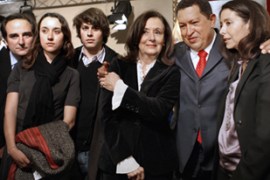 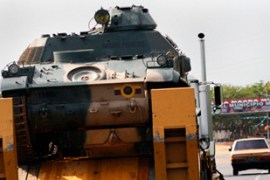