Al Gore, the former US vice president, appears to have become more influential since leaving office than he ever was during his time in power.

An Inconvenient Truth, the 2006 documentary film featuring a lecture by Gore about the grim future posed by climate change, has sold millions of copies around the world and was awarded two Oscars.

Soon after the film won an academy award for best documentary, Gore was the headline speaker at Live Earth, a worldwide series of concerts held to raise awareness of climate-change.

Gore’s book, The Assault on Reason, on which the documentary was based, has also been a commercial and critical success.

On Friday he appeared to have sealed his place as a standard-bearer for environmental campaigners by becoming a Nobel peace laureate.

He was awarded the accolade, alongside a UN environmental body, for “efforts to build up and disseminate knowledge about man-made climate change”.

But some have asked if climate change is really an appropriate area for such an award and questioned whether Gore’s actions while in government can really be described as peaceful.

The Stern Review, a 2006 report prepared for the UK government which examined the economics of climate change, argued there were several areas where civil unrest had been generated by adverse climatic conditions.

It argued in part that: “Climate-related shocks have sparked violent conflict in the past, and conflict is a serious risk in areas such as West Africa, the Nile Basin and Central Asia.”

Asked if climate change was really a matter for a peace prize, Gerd Leipold, the executive director of Greenpeace International, told Al Jazeera that there was no doubt that the issue was critical in terms of global peace and security.

“If we look at the predictions we can see it will cause such havoc in many societies,” he said.

Leipold also pointed out that there was little doubt Gore had become more effective as an environmental campaigner since he left US politics.

However, Dr Alan Hunter, a lecturer in peace studies in the UK, said he felt “the link between climate change and peace is really very tenuously made”.

“I don’t think anyone has carefully demonstrated the link between climate change and war,” he said.

“There are long term predictions that it will lead to resource scarcity and resource scarcity could lead to conflict, such as fighting over water in parts of Africa, but I think that’s accepted as being a few decades away.”

He told Al Jazeera awarding Gore the peace prize was a “surprising decision”.

Oberg described giving the prize to the former vice president as “a great misjudgment”.

In an article on the Transnational Foundation for Peace and Future Research website, Oberg pointed to Gore’s roles as vice-president to Bill Clinton, the US leader between 1993 and 2001.

In that role, Gore was part of an administration that bombed Kosovo, in what was then Yugoslavia.

Later the same administration bombed Afghanistan and Sudan, in response to an attack on its embassies in Kenya and Tanzania in August 1998.

Regardless of whether or not Gore’s work is really appropriate for a peace prize, the award has further prompted speculation on whether he will now run for US president.

On Wednesday, the New York Times carried a full-page advertisement by his supporters calling on him to launch a new presidential campaign.

“Your country needs you, as do your party and the planet,” the appeal read.

Though he has not ruled out the possibility of entering the presidential race, Gore, who lost out in his bid for the presidency to George Bush in 2000, appears unlikely to take up the challenge. 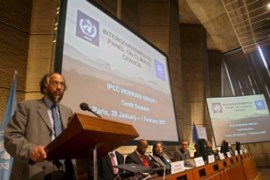