“We have seized hate literature in books and CDs,” Ahmed said.

The explosions in Karachi came a day after a suicide bombing in the capital Islamabad killed 19 people near a rally marking the first anniversary of a bloody government raid on a radical mosque.

The head was found in the bushes by the road where the attack took place, a Reuters news agency photographer said.

The heads of suicide bombers are often severed by the explosives strapped to their torsos and can provide vital clues.

The government is led by the Pakistan People’s Party (PPP) of former Benazir Bhutto, a former prime minister, who was killed in a suicide attack in Rawalpindi last December.

Bhutto’s widower, Asif Ali Zardari, who took over as leader of the party after his wife’s murder, said in a statement those behind Sunday’s “despicable” attack were trying to create chaos.

“The Pakistan People’s Party realises the grave threat that such terrorist activities pose … and the PPP government will do everything possible to check the activities of such elements and those responsible will be brought to justice,” he said.

Pervez Musharraf, Pakistan’s president whose power has withered since his allies were defeated in a February election and who has been facing calls to step down, cautioned on Friday that more “radical mosques would emerge if extremism and militancy were not tackled”. 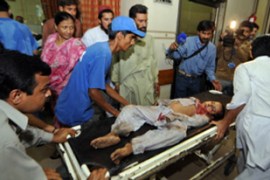 Karachi hit by series of blasts

One person is killed as six low-intensity devices are detonated in Pakistan city. 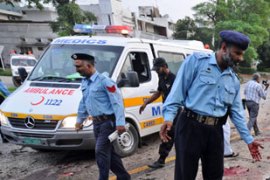