She said security forces were attacked by hundreds of Palestinians who pelted them with rocks and rolled burning tyres at them, injuring a border policeman.

She denied that the closure was affecting the movement of patients.

However, Salah al-Khawaja, a spokesman for the Ni’lin Committee for Resisting the Wall, said: “Casualties and other patients were prevented from leaving the village for treatment”.

David Chater, Al Jazeera’s correspondent in the West Bank, said: “This village of 5,000 people is essentially  being locked down under curfew, under a seige,  as tight as anything that the Gaza Strip has experienced since last Friday.”

“Palestinians have been protesting for weeks now that their land has been taken by the separation barrier,” he said.

Chater explained that the barrier was built to protect six Israeli settlements.

“Since last Friday, 35 people had been injured from rubber bullets and 100 from tear gas fired at the villages directly into their houses and the local medical centre has been running out of supplies,” Chater said.

The blockade involved declaring the construction site a “closed military zone,” a sweeping measure that did not appear to provide access to the area for any peaceful demonstrators.

Israel says the barrier is intended to keep out Palestinian suicide bombers, but it also loops around Jewish settlement blocs, cutting off some West Bank villages from their farmland.

Construction sites are flashpoints for confrontations between Israeli security forces and Palestinians, who are often supported by left-wing protesters from Israel and abroad.

Ni’lin residents said the closure was imposed on Friday, which also saw a march against the barrier during which at least 20 protesters were hurt by rubber bullets fired by Israeli security forces.

Four protesters from an Israeli solidarity group were arrested, an organiser of the demonstration said.

A demonstration was held on Saturday in defiance of the closure, with Ni’lin youths blockading roads used by bulldozers to access the construction site, residents said.

Israel Radio said the closure would be reviewed by Tuesday. 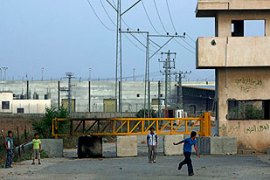 Reopening to allow goods into blockaded territory after a gap of three days. 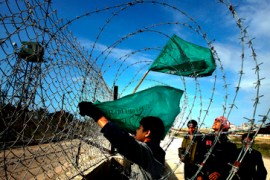 Their own worst enemy?

Scholars say Palestinian rifts could put an end to dreams of nationhood.