Belmoh Kamma is incandescent. “We want to vote,” he yells.

He is not wrong. The mass of bodies, that could loosely be called a queue, outside polling station number one in the Tengbeh Town area of the Sierra Leonean capital Freetown is static.

He and his friends were up and in the line at 5am waiting to vote.

It is now nearly 11am and polling station number one has only been open for people to cast their votes for president and parliament for 30 minutes. The polling station was due to open at 7am.

The late delivery of ballot boxes, caused by an early morning downpour, was one of the reasons hundreds were left queuing outside. The bottleneck entrance through a single door has not helped either.

The anxiety and frustration of Belmoh and many others shows the passion Sierra Leoneans have for these elections.

They hope their votes will help firmly consign their country’s violent past to the history books and alleviate the oppressive poverty that most are forced to endure.

Inside station number one things are a touch more orderly. International observers look on as employees from the national election commission guide voters through the process of taking ballot papers, marking them, and putting them in two ballot boxes – blue for parliament, purple for president.

Esther Hamar, a blue-bibbed election official says the speed of already delayed voting has not been increased by the tiny print used for voter registration lists.

A high illiteracy rate in Sierra Leone means that the pictures of the seven presidential candidates are pictured on the list so as not to confuse voters and reduce the possibility of attempted vote-rigging.

Fears of such attempts had proliferated before the vote and rumours of stuffed ballot-boxes and other incidents of fraud occasionally filter through on the many radios held aloft in the queue.

But they seem to be just isolated rumours and on the whole the main concern is that people will not be able to vote.

“I am very worried about the line,” says Julius. He and his friend Maloy have been waiting for five hours. “I am really pissed off.”

If they do eventually get to vote there seems little doubt they will not be plumping for the picture of Solomon Berewa, the ruling SLPP party candidate and current vice-president.

“This government has not helped the people,” he says. “They have no food to eat, people are grumbling.”

Past the queues and up the hill to station three 38-year-old Philip Amamra is also grumbling.

“Look I have my card,” he says waving his laminated voter registration card in the air. “They gave me this and now they won’t let me vote. This is my right.”

The elections are seen as a key test of the maturity of Sierra Leone’s political and social institutions in the first vote since UN peacekeepers withdrew in 2005, they had been present since the end of a brutal ten-year war in 2002 that left 50,000 people dead.

As a consequence most of the registered two million voters want their voice to be heard and with close results predicted and sharp political divisions a lot of pressure was on the country’s military and police.

However, in Tengbeh Town they are conspicuous by their absence and as scuffles begin outside station three, Foday Saddiki, a fire officer, is suddenly left as the sole security officer of any kind in the area.

“Stations 1,2 and 3 are out of control” he says on someone’s phone. “We need extra units.”

Kelbin is one of the election officials in the polling tent.

As the throng of people in front of him that is allegedly three different lines, wave their laminated cards at him he shakes his head.

“There has been voter education, but people still do not know what they are doing,” he says.

But the anxiety outside station three seems to be the storm before the calm.

Margaret Gegba thrusts her ink-stained finger in the air smiling. She says her seven-hour mission that began at 4am was worth it.

“I have good intentions for my country,” she says.

18-year-old Abu Bakar Kar Gbo is one of the many young Sierra Leoneans voting for the first time and says he is voting to “change the situation in my area.”

Walking back down the hill a smiling Julius says he finally got to vote and that “Ernest Koroma [the APC opposition candidate] is going to help me find a job.”

Not far behind him Philip Amara is also smiling. “I was on the list,” he says. 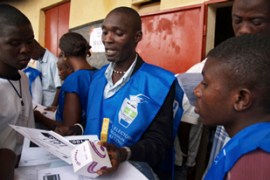 Voting under way after torrential rains threatened to cause chaos. 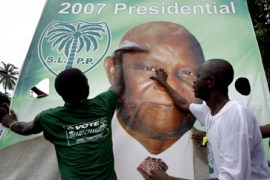 Weather could be biggest threat as campaigning for presidential election ends. 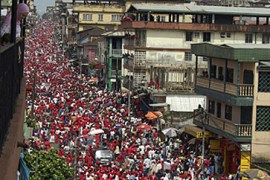 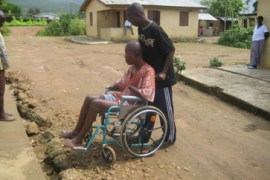