The deal was discussed at the sidelines of the WPC event, Deora said.

Talks on the 2,600km pipeline began in 1994 but stalled amid tensions between India and Pakistan and differences over prices and transit fees.

But India and Pakistan said last month that they had come to a commercial agreement on the deal.

India has been under pressure from the United States not to do business with Iran.

Washington accuses Tehran of being a state sponsor of terrorism and of seeking to build nuclear weapons, claims Iran denies.

But New Delhi, which imports more than 70 per cent of its energy needs, has been looking around for fresh supplies of oil and gas.

Earlier this year, India told Washington not to interfere in its dealings with Iran after a US state department spokesman said India ought to put pressure on Tehran over its nuclear programme.

India said that Iran had the right to peaceful use of nuclear energy but has asked Tehran to co-operate with the United Nations nuclear watchdog.

If the pipeline deal is signed, it would come three years after India last signed an agreement with Iran for the supply of five million tonnes of gas annually for 25 years.

The WPC event highlighted apparent divisions between the oil powers and consumer nations over how to bring down record oil prices.

India, which subsidises its fuel costs to ease the burden on the poorest members of society, has recently raised prices amid the soaring cost of crude oil.

But Deora said that the four-day WPC event had not been a failure.

“There has been some movement. The very fact that everybody met and everybody spoke about different angles and different ideas …  is a great achievement,” he said.

“You don’t expect the price [of oil] to go down to 30 dollars… You have a dialogue and you present your views.” 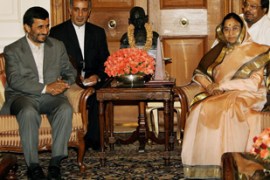 Iranian president says he hopes to finalise the energy project “in near future”.

Indian officials have begun negotiating a timetable for the construction of a multi-billion dollar gas pipeline running from Iran, through Pakistan, to India.