The truce was supposed to lead to the easing of a crippling blockade Israel imposed after Hamas seized power in Gaza more than a year ago, but the military said the crossings would stay closed until at least Sunday.

Ismail Haniya, the Hamas prime minister, accused Israel of not living up to its part of the truce.

“We still say that maintaining the calm is a national interest, but the Israelis must commit to lifting the siege and opening the crossings,” he told reporters after prayers at a Gaza mosque.

In an interview with Al-Hayyat, a London based newspaper, Abu-Marzouk, chief negotatior on the fate of Shalit, accused rival Palestinian group Fatah of orchestrating the attacks in order to sabotage Hamas.

Abu-Marzouk also called on Egypt to intervene to ensure that the rocket fire stops.

Israel has hinged its adherence to the ceasefire on negotiations for the release of Shalit, who was kidnapped by Gaza fighters in a cross-border raid in June 2006.

“The agreement for calm in the south stipulated that there would be a cessation of rocket fire on Israel, as well as expedited progress on the Gilad Schalit issue,” an Israeli government official told the Associated Press news agency.

“The rocket fire has not ended, and we hope that there will be progress on Gilad Shalit.”

Palestinian officials want Israel to free hundreds of Palestinians being held in Israeli jails in exchange for Shalit. 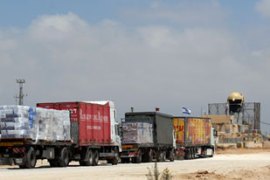 Military shuts down border after a rocket attack fired from the territory.