“We can expect a really warm reception. Friends have been really heavily involved in lobbying for the liberation of Betancourt who is really a national heroine in here,” Estelle Youssoffa, Al Jazeera’s correspondent in Paris, said.

“Her family and the members of her political team have already hinted that she might go back as soon as possible to her political career.”

Betancourt was reunited with her family shortly after she was rescued from the Revolutionary Armed Forces of Colombia (Farc).

At a news conference in the Colombian capital, Bogota, she said she contemplated suicide during her captivity.

But she said on Thursday that she could not face “what her children would think” if she ended her life.

She also said that, if given the chance, she would have killed one of her captors to escape.

Betancourt was among 15 captives rescued from the Farc in an operation in which the Colombian military tricked the rebels into handing them over.

Earlier on Thursday, she had an emotional reunion with her children, sister and former husband, who had had flown to Bogota from France alongside Bernard Kouchner, the French foreign minister.

“Nirvana, paradise – that must be very similar to what I feel at this moment,” Betancourt said at a news conference with her family after their meeting.

Betancourt also said that the Farc was “finished” as an organisation in its decades-long struggle against the Colombian government and “had to find a different path”.

“In the midst of destruction comes the opportunity to find direction and a better way,” she told journalists.

“As such I hope the Farc understand this is the time to release all hostages.”

The group is thought to hold about 30 foreign captives and hundreds more Colombian civilians and security forces members.

Also on Thursday, Colombian television showed images of two Farc rebels who had been captured in the rescue operation.

The two men, whom authorities said were known by their aliases “Cesar” and “Gafas”, appeared nervous and one had a facial wound.

In the first reaction from a news agency close to the Farc since the rescue, the Anncol website called “for common sense and to make room for peace”.

“Definitely the future of Colombia cannot be civil war,” read the statement on the pro-rebel news site.

The Anncol statement also invited the Farc to “not waste a historic opportunity” to hold negotiations that “would lead to a political exit to this conflict … even though the Bogota administration cannot be trusted”.

It also urged the government to work towards a viable end to more than four decades of conflict.

“It is necessary at this moment to urge the Colombian oligarchy to not become intoxicated with its triumph … and believe they can impose whatever they want on the Colombian people,” it said.

Meanwhile, US military officials said on Thursday that three US defence contractors who were also freed during the operation and were flown back to a US military base in San Antonio, Texas, were in good health.

The hostages, who had been divided into three groups, were taken to a rallying point on Wednesday morning where two disguised helicopters piloted by Colombian military agents were waiting, he said.

It was not until the helicopters were airborne, Betancourt said at a news conference shortly after her release on Wednesday, that the mission’s commander turned to her and said: “We are the national army, you are free.”

Al Jazeera’s correspondent Mariana Sanchez in Bogota said it seemed the operation had been planned by the Colombian military for some time. 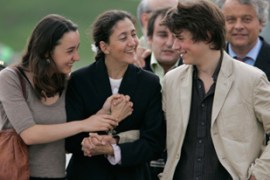 Ex-hostage who says thoughts of children helped her survive ordeal, calls on Farc to end struggle. 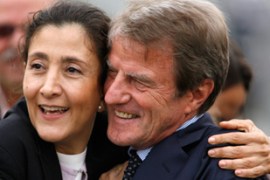 Former hostage in emotional reunion with children after more than six years in captivity. 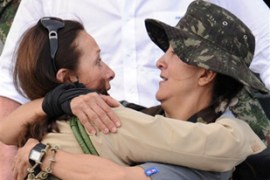 Colombian army rescues politician and 14 other hostages held for years by Farc rebels.