Employers started laying off substantial numbers of workers in January amid a lingering housing market slump, an international credit squeeze, a sharp downturn on Wall Street and rocketing oil prices, which surged above $146 a barrel on Thursday.

Many analysts say the US economy is on the brink of recession.

The Bush administration has approved a $169 billion economic stimulus plan, that includes tax rebates for many US citizens, to bolster the economy, but there have been few signs that it has helped create jobs.

“Unemployment is still on a rising trend, payrolls are falling and there’s no light at the end of the tunnel here, so the tax rebates may have pushed up consumer spending, but it doesn’t seem to have improved the labour market yet,” said Ian Morris, chief US economist at HSBC North America.

The US economy has shed jobs every month of this year so far, and June’s job cuts followed a revised figure of 62,000 jobs lost in May.

The government had originally said that 49,000 jobs were cut in May. 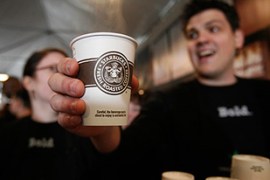 Starbucks to close 600 US outlets