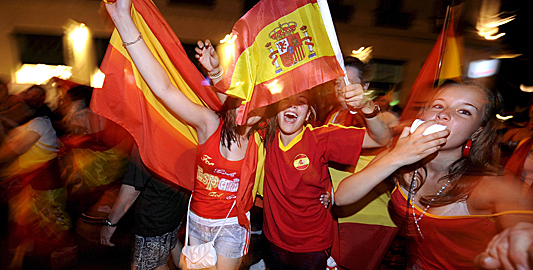 Spain defeated Germany 1-0 in Vienna last Sunday, in the final of football’s Euro 2008 tournament – the country’s first victory in a major competition for 44 years.

It sent the nation into wild celebrations but more significantly, argues Al Jazeera’s diplomatic correspondent, it marked a moment when Spain put its regional differences behind it and looked to the future.

“So what’s the diplomatic correspondent doing in Madrid covering the football?” bleeped my phone with a message from an old colleague in Hout Bay, South Africa, who had been watching Al Jazeera’s coverage of the Euro 2008 final between Spain and Germany.

A good question – and one that deserved an answer longer than a text – because this final wasn’t just another football match between one side, Spain – with a solid 44 year record of losing – and another side, Germany, with an equal record of victory.

Instead the match – and the great build up to it  – enabled many commentators and journalists, to take the pulse of a newly confident Spain,  a Spain that seems to have finally shaken off the dark shadows of its fascist past.

Seventeen million Spaniards had reportedly tuned in to watch the semi-final between Spain and Russia, a record unsurpassed since the days of General Franco, who ruled Spain 1936 to 1975, and when there was only one state-run television station.

Over twenty million people watched the final itself, tuning in to will the team to victory.

The centre of Madrid was, of course, a sea of yellow and red – the Spanish national flag – as tens of thousands turned out to watch the match on huge screens, a scene replicated across the country.

Madrid’s citizens celebrated their country’s win and they celebrated again when their team came home.

Huge, happy crowds – barely a need for the hundreds of police on duty – and all full of a new self confidence at their 1-0 triumph.

It is possible to read too much into one football match, albeit a joust that for many Spaniards finally expelled the jinx of 44 years without a major tournament victory that they believe had been put upon them.

But something interesting is at work in the new Spain. Old hostilities and suspicions were suspended in Catalonia and to an extent in the Basque country.

Nationalists voices in these two historically independent minded parts of the country were lowered as large numbers of Catalonians and Basques got behind “their” football team.

Football, to an extent, had transcended politics, and even gave some observers the confidence to predict that the high water mark of Catalonian and Basque nationalism has been reached.

In fairness, that process has already been underway in Catalonia, when in March the socialists took over the reigns of government from the nationalists.

Yet Spain’s current recession is deeper than many of its European neighbours, so economic malaise can just as easily unpick the new mood that seems to have gone beyond the centre of Madrid.

But Spain is used to being overlooked.

When Nicolas Sarkozy, France’s president, talks grandly of a new “Mediterranean Union”, there is barely a mention of France’s huge southern neighbour.

So if Spain is now in the process of burying some of its demons – including hopefully the motley band of “football supporters” who had draped themselves in fascist insignia and Nazi swastika flags in the centre of Madrid – then increasingly she will emerge more as an equal to France.

And Spain isn’t waiting for the rest of Europe as she forges ahead with new links with Latin America and Cuba.

Which was another striking feature of the great football celebrations in the capital – for caught up in that great throng were equally enthusiastic Colombians, Ecuadorians and Mexicans.

Football, it seems, had also united the great Spanish diaspora.