HRW said a blanket charge often brought against terrorism suspects is at the heart of the problem.

The charge, criminal association in relation to a terrorist undertaking, is too sweeping, the report says, because “no specific terrorist act need be planned, much less executed, to give rise to the offense”.

It complained that people who had any contact with the suspects – including family members, neighbours and even mere acquaintances – were sometimes detained.

Judith Sunderland, the report’s author, said: “It allows for too much flexibility in the interpretation.

“So you have a history in France of using this charge to arrest large numbers of people on the basis of very little evidence they have anything to do with a terrorist plot.”

French officials were quick to defend their system.

Luc Chatel, a government spokesman, said: “All our laws on counterterrorism were taken in response to a threat.”

Guillaume Didier, a justice ministry spokesman, said: “French justice is exemplary and its counterterrorism laws are regarded as models by other countries around the world.”

In the 1980s, France was hit by a series of attacks on trains, underground services and department stores.

In 1995, a blast by an Algerian group in Paris’ Saint-Michel train station killed eight people and injured 150.

There have been no attacks since, despite calls by an Algeria-based al-Qaeda affiliate to target France.

Sunderland also criticised the French practice of holding suspects for up to six days with little legal counsel.

The report said that there were “credible allegations of physical abuse of terrorism suspects in French police custody,” citing testimony from those detained that sleep deprivation, disorientation, constant repetitive questioning and psychological pressure were common.

“France has an obligation under international law to ensure that any evidence obtained under torture is never used in any part of legal proceedings in France,” she said.

The group recommended that France require proof that suspects intend to participate in a terrorist plot and allow for the presence of a lawyer from the beginning of detentions. 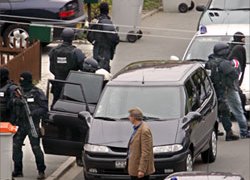 Six former inmates of the Guantanamo Bay detention centre have gone on trial in France, accused of links with a terrorist group.